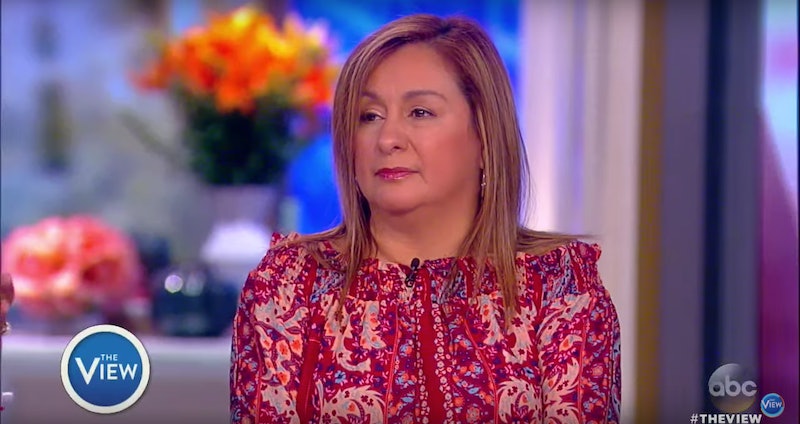 President Donald Trump will give his first-ever State of the Union (SOTU) on Tuesday and many congressional Democrats are bringing guests who will send a message of protest to Trump's administration and his policies. One of these guests is Cindy Garcia, Representative Debbie Dingell's SOTU guest. Cindy is the wife of Jorge Garcia, a 39-year-old man deported in early January after living in the country for 30 years.

Jorge, Cindy's husband, was deported to Mexico on Jan. 15. He had been brought to the United States when he was 10 years old and had lived in the country ever since. He has two children with Cindy and has worked for years as a landscaper in Michigan.

According to The New York Times, Jorge tried to change his immigration status back in 2005, but his attorney had filed the wrong paperwork. A judge ordered his removal from the country in 2006. Still, Jorge was able to have his deportation repeatedly delayed because officials reportedly understood that he was working to change his status. However, as Cindy told The New York Times, this year, an immigration official reportedly told her husband that "because of the new Trump administration, because he had an order of supervision and an order of deportation, he had to leave."

Jorge was then deported and forced to say goodbye to his family at the Detroit Metropolitan Airport, where a photo was snapped of him hugging his wife and children. This photo has since been widely shared in the media, serving as a visual representation of the impact Trump's immigration policies is having on families.

Since her husband was deported, Cindy has worked tirelessly to try to ensure that his story is told, for the sake of both Jorge and others in similar situations. Earlier this month, she expounded on her mission, telling CNN's Brooke Baldwin:

I'm trying to be strong. I just want to get my story out there. As depressed as I am, and I just want to scream and cry and lay in bed and not move, I know that I have to come forward for the people who cannot and tell our story. And how devastated we are that our case should have been looked at as an individual case and not as a whole because my husband is not a criminal.

Rep. Dingell announced on Jan. 18 that she planned to invite Cindy to the State of the Union, praising her "incredible resilience and courage in the face of these impossible circumstances." The congresswoman has been working closely with the Garcia family in hopes of reuniting them; she was also responsible for convincing Immigration and Customs Enforcement to let Jorge stay in the U.S. though the holidays — until Jan. 15 — though ICE had ordered him deported in November.

Dingell further shared her thoughts on the Garcia family's case in a statement on her website announcing Cindy as her guest:

The Garcia family's story is heartbreaking and infuriating. It is both a symptom of a long-broken immigration system and a new rash immigration policy that does not recognize the difference between a hardworking family man and a criminal. This must change.

The congresswoman also added that she was honored to be accompanied by Cindy, who serves as:

[A] voice for the hundreds of thousands of aspiring Americans who are part of the fabric of our communities, and who deserve a pathway to legal status in the country they call home.

For her part, Cindy told The Washington Post that she was "overwhelmed" by Dingell's invitation to attend the State of the Union. She noted that she was looking forward to being in the same room as the president and members of Congress, who are likely set to make crucial immigration decisions in the coming months.

I hope that when they see me they can connect and feel what we're dealing with ... that they have some type of compassion, if not for me than for the children who were separated from their dad.