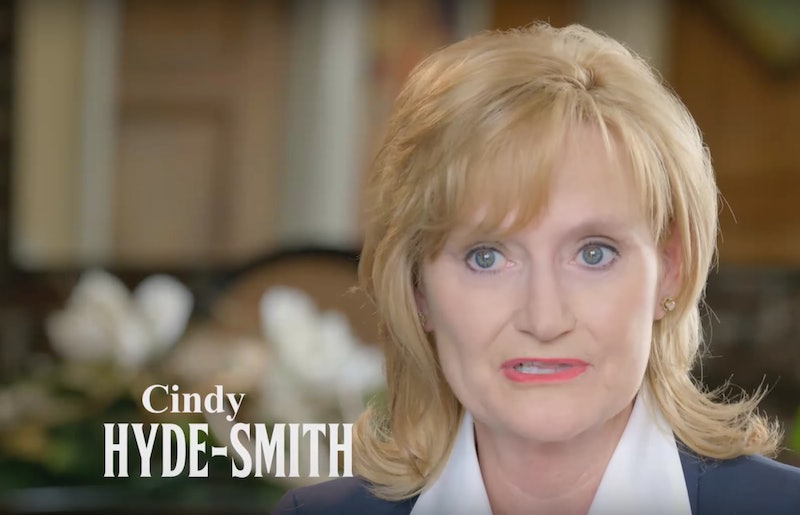 Mississippi has never elected a woman to Congress. The state will soon be represented by its first-ever female senator, however, after Gov. Phil Bryant appointed a Republican state official to replace the retiring Sen. Thad Cochran. So, who is Cindy Hyde-Smith? The former Democrat is already facing backlash from the White House.

Hyde-Smith will take her seat in the U.S. Senate on April 2, after Cochran steps aside on April 1 due to health concerns. White House officials told Bryant that the administration wouldn't support Hyde-Smith's appointment because they worried she couldn't win the November special election, Politico reports. Her campaign website says she plans to run to keep the seat, creating a three-way race between her, Republican state Sen. Chris McDaniel, and Democratic former U.S. Rep. Mike Espy.

The White House's concern reportedly stems from the fact that Hyde-Smith flipped parties. The cattle farmer served in Mississippi's state senate for 12 years, and she switched from the Democratic to the Republican Party in 2010. Her website describes her as a "lifelong conservative," although her opponents will likely bring up her change of heart on the campaign trail.

The agenda outlined on her campaign site favors the Trump administration, as well. She wants to protect "historic Trump tax cuts," champion Trump's immigration plan, fully repeal Obamacare, protect the Second Amendment, and support "the right to life of the unborn." Even as a Democrat in Mississippi's state senate, Hyde-Smith had a 100% pro-life rating, according to her website.

Hyde-Smith currently lives in Brookhaven, about an hour south of Jackson, with her husband and daughter. She attended Copiah-Lincoln Community College and the University of Southern Mississippi before raising beef cattle. She's also a partner in the local stockyard auction market.

Because of her profession, agriculture has always been Hyde-Smith's main focus as a legislator. As Mississippi's agriculture commissioner, she worked to open the international market for American beef exports and to strengthen country-of-origin label requirements. She's won multiple agriculture awards throughout her career, including the Agriculture Legislator of the Year from the Mississippi Association of Conservation Districts and the Outstanding Service to Small Farmers Award from Alcorn State University.

Cochran didn't share the White House's concerns about Hyde-Smith replacing him in the Senate, instead saying he believes his successor is qualified for the position. "I congratulate Governor Bryant on his historic selection of Cindy Hyde-Smith to represent Mississippi in the United States Senate," he said in a statement. "She is a very well-qualified person whose experiences and excellent character will benefit our state in Washington."

While many praised the fact that Mississippi will finally be represented by a woman in Congress, some were baffled that it took so long. “It’s still rather shocking that in 2018 the state has never up until now, has never sent a woman to represent it in Washington either in the House or the Senate,” Debbie Walsh, director of the Center for American Women and Politics, told USA Today.

U.S. Sen. Roger Wicker, the state's second Republican senator, looks forward to working with Hyde-Smith on Capitol Hill, writing in a statement that she's "an excellent and historic pick." Come April, he'll have his first female colleague from his home state.

More like this
Beyoncé & Madonna’s “Break My Soul” Remix Honors A Group Of Black Icons
By Stephanie Topacio Long
A Political Thriller Inspired By The Munich Massacre Is Coming Soon
By Darshita Goyal
Why Eurovision 2023's Host City Won’t Be Revealed For A While Yet
By Sam Ramsden and Rachel Mantock
Are John Legend & Kanye West Still Friends? The Singer’s Latest Update Is Candid
By Brad Witter
Get Even More From Bustle — Sign Up For The Newsletter