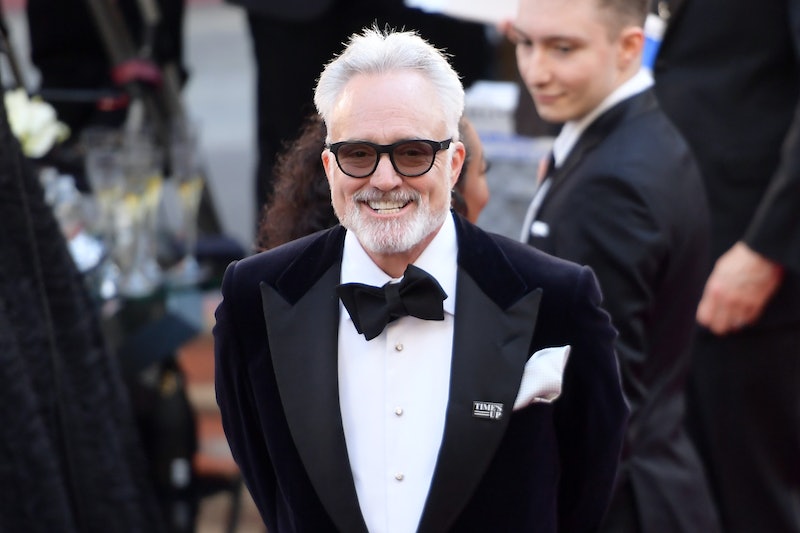 While taking Emily to his house, Aunt Lydia describes Lawrence as "a very brilliant, very important man" who is known as the "architect of Gilead's economy." What does that mean, exactly? Later, it is revealed that he had something to do with the labor camps in the Colonies. Handmaids are part of the economy as well — remember Season 1, when the girls feared they were going to be traded to Mexico?

"We're not sure where this guy is coming from," executive producer Warren Littlefield said in an interview with TV Guide. "He is an economic architect of Gilead, and yet he has regrets. He's in a complicated marriage, and Emily is assigned to be a Handmaid at his household. He just doesn't play by any of the rules, and so we are whipsawed with his character, wondering, 'Good guy? Bad guy? I'm not sure.' And that plays to a wonderful conclusion in Season 2."

The vibe at Commander Lawrence's house is bizarre right off the bat. If you were yelling at Emily through the screen to Get Out, you probably aren't alone. It's not the sterile, overtly polite and pious atmosphere that we are used to on The Handmaid's Tale. Lawrence's Martha, — who is missing an eye — sasses Lawrence back when he threatens to beat her. There's eccentric art everywhere, and Lawrence himself is somehow more fashionable than other men in Gilead with an ascot. He doesn't allow Lydia to stay a moment longer than necessary. What is he thinking? Is he hiding something? Is he complicit, evil, or secretly part of the resistance? This man is near impossible to read, and brings an energy to The Handmaid's Tale unlike anything we've seen before.

Lawrence asks for her opinion on laws like penalizing women for first offense reading by cutting off a finger. Later, the two have a frank discussion at the table. While Lawrence is unpredictable, and that can be frightening in Gilead, compared to June's always coded conversations with Fred Waterford in his study, this scene feels a bit more relaxed. "We value privacy in this house," he says to her. He has has clearly read up on Emily's history, somehow. He knows what happened to her before and after Gilead's rise. He also asks her about her circumcision — and, while certainly menacing, it's still unclear what his deal is in that moment.

The creepiest thing about Lawrence is his wife, who is "ill" and retiring upstairs for the majority of the episode. She talks to Emily in the middle of the night. "Don't tell Joseph that I came out," she whispers, in what feels like a moment of gothic horror. "He doesn't like it when I talk to the girls."

"He did something terrible," she says. "Terrible! He came up with the whole thing. The Colonies. He planned everything. He figured the whole thing out, and I said — real people are digging up that dirt, and it's poison!" At that point, Lawrence intercepts her and takes her back to her room as she screams, calling him disgusting. Do you think that he agreed to take in Emily as a Handmaid because she has been to the Colonies? Is this some kind of self-punishment or attempt at redemption?

"Life didn't turn out the way she wanted it to," Lawrence says to Emily about his wife. "She was an art professor. She wanted everything to be beautiful." How often do you think they get into these arguments?

He also asked Emily what it felt like to run over a guard — is he thinking about rebelling himself, or is he just sadistic? He definitely can't be trusted, but he certainly is an interesting character to watch. With only one episode of The Handmaid's Tale left this season, who knows what will happen with Emily next.

More like this
On 'The Handmaid’s Tale,' Christine Ko Fights Back
By Gretchen Smail
Everything You Need To Remember Before ‘The Handmaid’s Tale’ Season 5
By Grace Wehniainen
This House of the Dragon Character Will Create Another Scandal For Rhaenyra
By Kadin Burnett
Nicola Coughlan Shared A Lady Whistledown Excerpt From ‘Bridgerton’ Season 3
By Grace Wehniainen, Alyssa Lapid and Sam Ramsden
Get Even More From Bustle — Sign Up For The Newsletter