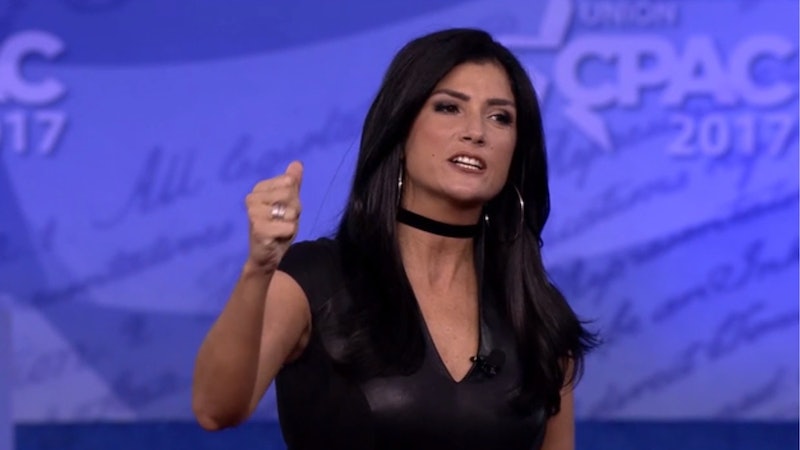 In light of Monday morning's chilling massacre in Las Vegas, NV, in which over 50 people were killed and more than 400 rushed to the hospital, it's important to understand who is behind fight against gun control, as their names will undoubtedly emerge over the next several days as many push for stricter gun control laws. So, who is Dana Loesch? The NRA spokesperson is a conservative pundit you should know (and understand).

Loesch is perhaps most widely recognized as the face of two controversial NRA videos released earlier this year, which painted an "Us v. Them" narrative of the United States.

"They use their media to assassinate real news. They use their schools to teach children that their president is another Hitler. They use their movie stars and singers and award shows to repeat their narrative over and over again," Loesch says in the now-viral video, which was posted to the NRA's Facebook page. "The only way we stop this, the only way we save our country and our freedom is to fight this violence of lies with the clenched fist of truth."

The video was widely criticized for advocating for violence against liberals and leftists and for serving as a bellicose call to arms for conservatives.

Before her rise as an NRA spokesperson, Loesch was (and remains) a conservative radio talk show host, with her own show, "Dana: The Conservative Alternative," which runs on Glenn Beck's The Blaze network. Her brand, "young, punk-rock, conservative irreverence," per her bio on RadioAmerica.com, has rocketed her to a prominent position within "alt-right" circles.

In defying a number of Republican stereotypes — she's a tattooed young mother who eschews traditional Christianity and listens to rock music — Loesch has sidestepped many of the criticisms typically leveled at conservative pundits.

Loesch began her career as a "mommy blogger" in St. Louis, after leaving college and marrying her husband, Chris, at 22. Her parenting blog, "Mamalogues," which tracked her path to becoming a "non-denominational Jesus freak," a mother and a homeschooler, proved a launching pad for her career, leading to the creation of "The Dana Show," which ran #1 in its time slot on KFTK and a parenting column in The Riverfront Times (for which she was named Best Columnist in 2007).

By 31, Loesch was a founding member of St. Louis' Tea Party chapter. Her shift from Democratic to "conservatarian" was reportedly sparked by 9/11, which happened six months after the birth of her first child. She blogged anonymously from 2001 to 2004, getting in early on what became a game-changing media platform and developing her voice as an alternate to mainstream politics. Mamalogues was founded in 2004. It evolved into a column two years later, carried by the St. Louis Post-Dispatcher from 2006 to 2008. In 2009, Nielsen released its list of "Most Powerful Mothers"; Loesch was in the top 20.

To understand Loesch's rise to fame, which hit new levels when she was named an NRA spokesperson in February, is to dive into the evolution of conservative politics in the United States over the past two decades. Younger generations on both sides of the political spectrum have felt increasingly disenfranchised by institutionalized politics. Bernie Sanders proved galvanizing for those tired of the centrist, corporate-friendly direction of the Democratic party. Trump spoke to those who wanted to express their thoughts that had previously been considered inappropriate. And ultimately, he won.

As coverage of the Las Vegas shooter continues to filter in, the story will undoubtedly become the flashpoint for gun control in the United States. It's the largest mass shooting in modern U.S. history. And Loesch, thus far, is refusing to engage in discussions on Twitter that make any tie to the larger political issue.