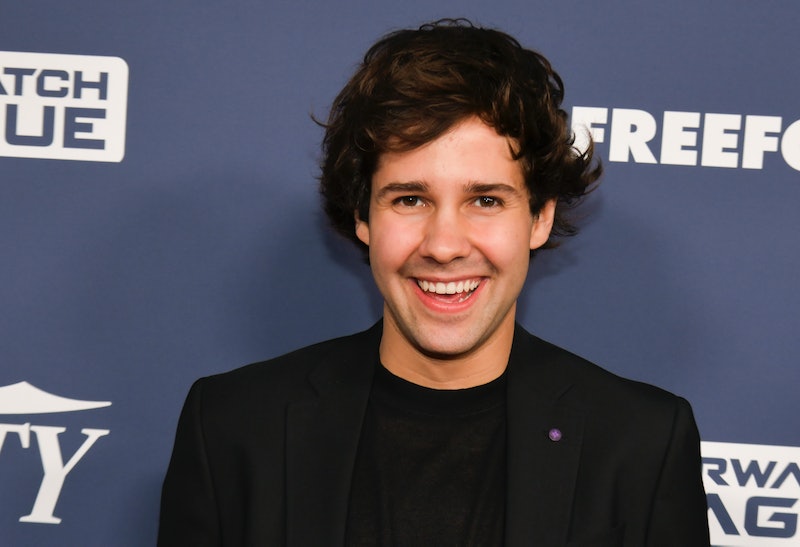 The 2019 Teen Choice Awards air Sunday, Aug. 11 on Fox. This year, fans can expect performances from OneRepublic, HRVY, Mabel, and CNCO, among others, per Entertainment Tonight, and the nominees include Lil Nas X, Post Malone, Taylor Swift, Billie Eilish, and Bad Bunny, according to Billboard. And the festivities will be co-hosted by Pretty Little Liars alumna Lucy Hale and David Dobrik, who is a YouTube personality.

Following in the footsteps of YouTuber Lele Pons, who co-hosted last year's festivities alongside Nick Cannon, this assignment is a huge step for Dobrik. While his name may not be familiar to older viewers, teenagers likely recognize him from YouTube, Instagram, Twitter, or all of the above. He's won several accolades over the past few years, including Vlogger of the Year at the 2017 Shorty Awards and Favorite Social Star at the 2019 Kids' Choice Awards.

Furthermore, he does branded content with SeatGeek, per Tube Filter, which included shooting a video of himself right after getting his wisdom teeth removed.

Here's everything you need to know about the good-natured prankster before he makes his hosting debut Sunday night on Fox.

He Did It For the Vine

According to the Verge, Dobrik got his start on Vine before moving to YouTube in 2015. Since then, he's racked up an impressive 13,411,852 subscribers and 8.6m Instagram followers.

"I feel like once I leave the country there are so many new things that open up," he told teen magazine J-14 earlier this year. "I'd love to visit Slovakia, where I was born, with all my friends because I feel like they can just tear my family apart there and I think that would be hilarious."

His Group of Friends Is Called the Vlog Squad

He's Had Notable People In His Videos

In May 2019, Dobrik married Jason Nash's mother, Lorraine. Yes, you heard that right. The YouTuber explained his reasoning on Twitter, saying, "My friend told me I would never find love and get married. So I flew to his moms house and married her on the spot. Now that same friend is my stepson. True love always wins." Dobrik and Nash married in a quickie Vegas ceremony before honeymooning in Hawaii, which is depicted in the above video.

Fortunately, his bride-to-be was in on the joke, and when Dobrik told her, "I want to be Jason's step-dad," she responded, "That would be hysterical."

...Only to Divorce Her A Month Later

While the whole thing was a prank, Dobrik filed for divorce on June 11, E! News reported. "I'm good," Dobrik told the outlet post-divorce. "I'm just happy to be thinking about myself again. It's a lot. It's a lot to have to deal with going through that. It's a lot caring for another person, so it's nice. I'm just focusing on myself currently."

Perhaps Dobrik is best known for the viral video he and his ex-girlfriend published in June 2018, sharing that they had split up.

He Could Become the Next Jimmy Fallon

"In 10 years I'd love to do something with late night," Dobrik told J-14 in the same interview. "Probably within the next five. I feel like I have to be a little bit older just so I have more experience."

So it seems like Dobrik is going places, and co-hosting the Teen Choice Awards is just the first step.

More like this
A Full Debrief Of Who Follows Who From Love Island – & Who Doesn’t
By Shahed Ezaydi
Kathy Hilton Tried To Explain Why She Misidentified Lizzo As Precious On Live TV
By Jake Viswanath
The Sean Bean Intimacy Coordinator Controversy, Explained
By Sam Ramsden
Kanye West Has The Most Kanye Reaction To Kim Kardashian & Pete Davidson's Split
By Jake Viswanath
Get Even More From Bustle — Sign Up For The Newsletter