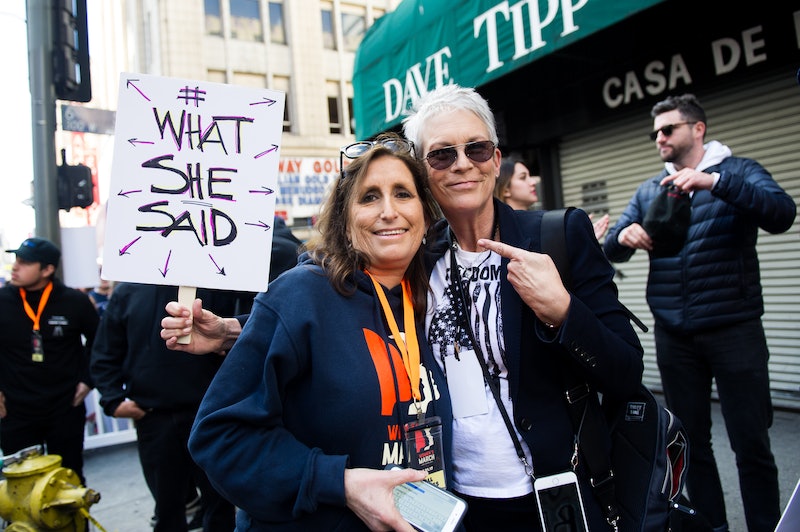 On Saturday, March 24, the city of Washington, D.C. will play host to a huge protest march, similar to the Women's Marches that descended on the nation's capital each of the last two years. This time, however, it'll be the March For Our Lives, a major demonstration in support of new gun control laws. But it'll have more in common with the Women's March than just its location ― it'll also have March For Our Lives organizer Deena Katz, who is also one of the executive directors of the Los Angeles Women's March Foundation.

If you've heard of Katz before, that might be why. But it could also be that you're more familiar with her work in film and television. Katz is a producer and casting director on shows like Real Time With Bill Maher, The Grand Tour, and perhaps most prominently, Dancing With The Stars. According to The Miami Herald, some of the survivors of the deadly Stoneman Douglas High School shooting last month who called for the march chose Katz to organize the event.

According to the paper, Katz ― whose role in planning to March For Our Lives is reportedly independent from her role with the Los Angeles Women's March Foundation ― filed an application permit for the march last month. The details of the application reveal just how many people organizers expect to arrive on the National Mall this weekend ― namely, an approximated 500,000 people taking to the streets in support of gun control.

Of course, it remains to be seen if that number of people will actually turn out, in addition to how many people will attend the dozens of sibling marches that will be happening throughout the United States, and around the world. The last Women's March earlier this year saw more than a million Americans take to the streets, although it's impossible to say just yet whether that many people will show up on Saturday.

The march is scheduled to begin in Washington, D.C. at 10:00 a.m. ET. If you're interested in taking part, but don't live in the nation's capital, you'll want to get familiar with the where and when of whatever is taking place in your city or town. The official March For Our Lives Facebook page is currently packed with information about all the simultaneous demonstrations scheduled for Saturday.

You can also check the March For Our Lives website for a list of major sibling marches. The march is taking place in a political climate that's been deeply impacted by the shooting in Parkland last month ― thanks in no small part to the activism of many of the survivors of the attack, issues of gun violence have remained squarely in the national consciousness since the fatal shooting.

In recent years, mass shootings have become a grim feature of modern American life, and sometimes they've faded from the national conversation startlingly quickly. Last year's mass shooting in Las Vegas is a noteworthy example. When a gunman opened fire from a hotel room overlooking an outdoor music festival, a staggering 58 people were killed, and hundreds more were injured.

In the immediate aftermath of the shooting, many members of congress began floating the idea of banning bump stocks, a device that allows a semi-automatic weapon to simulate an automatic rate of fire, which the shooter used on his gun. And yet, no such action was ever taken, and within months both the media and the political world had seemed to move on to other things.

The March For Our Lives is the latest attempt to prevent that kind of drifting focus, and keep applying pressure on elected officials to pass new gun control reforms. In short, it's not hard to see why march organizers are expecting sky-high numbers of participants, or why the Parkland students have decided to turn to Katz, an experienced organizer, to help bring it all together.