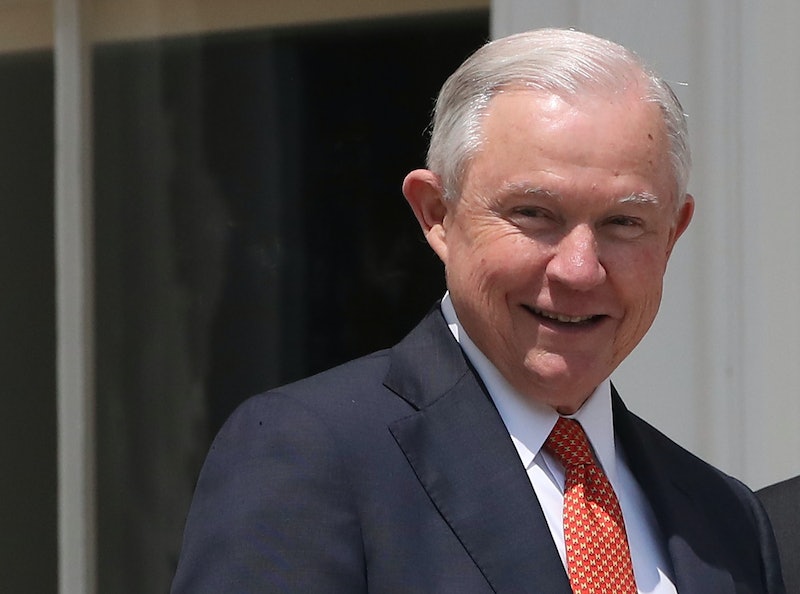 It was a moment barely anyone noticed when it occurred, but it was the start of an ongoing legal drama that's now spanned nearly nine months. Back in January, during then-senator Jeff Sessions' confirmation hearing to become attorney general, a Code Pink protester was arrested and charged with a crime after laughing out loud during Senator Richard Shelby's testimony. And even all these months later, you still need to know who Desiree Fairooz is, because Sessions and the Justice Department have clearly not forgotten.

Fairooz was charged following her audible laugh at Sessions' confirmation hearing, a story which drew plenty of shock, outcry, and derision, especially from the left side of the political spectrum. You can watch the seemingly innocuous moment here ― basically, moments after Shelby claims that Sessions had an "extensive record of treating all Americans equally under the law," you can hear a faint, gasping laugh come through on the C-SPAN microphones.

That was Fairooz laughing, and she was promptly hauled out of the hearing room as a result. Subsequently, she was charged and convicted for the interruption, facing the potential of up to a year in prison. That conviction was thrown out by a judge in July.

According to a report this week from Ryan J. Reilly of the Huffington Post, however, Fairooz's saga is not yet over. That's because the Department of Justice, led by Sessions after he cleared that confirmation process in February, will reportedly re-try Fairooz in November. It's attempting to convict her after she reportedly turned down a deal that would've required her to plead guilty to one charge to avoid any prison time.

Fairooz tweeted about her upcoming trial date, set for November 13, calling it "vindictive" that the government was continuing to try to convict and jail her over her laughter.

Fairooz, for her part, has defended her momentary interruption as "reflexive," and "an immediate rejection of what I considered an outright lie or pure ignorance."

Prosecutors, on the other hand, will have to argue that Fairooz's disruptions as she was being arrested ― rather than the laughter itself ― justifies a conviction. The prosecution in her initial trial in July had argued that the laughter in and of itself was suitable grounds to convict her, a claim the judge who threw out the initial conviction called "disconcerting," according to Reilly's report.

Given the fact that the department is led by Sessions himself, and that the case is essentially being brought against someone for laughing at him ― or at least, a positive characterization of him ― it's easy to see why many progressive critics view this as a concerning act of prosecutorial overreach.

In short, despite the apparently negligible nature of the alleged offense, Fairooz will be returning to a courtroom ― assuming no kind of plea agreement is reached before November, that is, and that the Justice Department doesn't think better of proceeding with the prosecution.

More like this
Every Single Big & Small Way You Can Fight For Abortion Rights
By Tess Garcia
5 Ways To Stand In Solidarity With Women In America From The UK
By Sophie McEvoy
How To Fight For Reproductive Rights, Based On How Much Time You Have
By Courtney Young
Yinka Bokinni Recalls Terrifying Truth At Heart Of 'How To Hire A Hitman'
By Frances Stewart
Get Even More From Bustle — Sign Up For The Newsletter