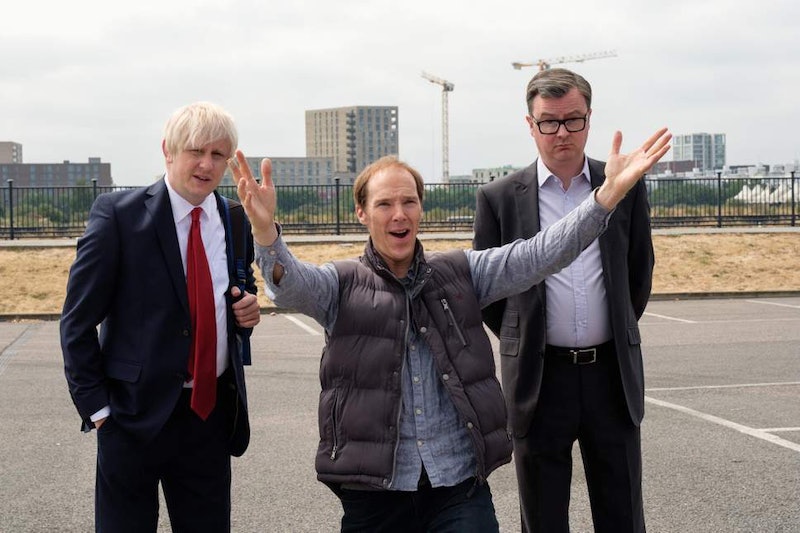 Who would have thought that on the day the Channel 4/HBO drama Brexit: The Uncivil War premiered, a date would finally be confirmed for MPs to vote for on Theresa May's Brexit deal. I mean, talk about timing. And while I'll confidently admit that I am totally not caught up on everything Brexit, hopefully the Benedict Cumberbatch-led feature will help viewers — myself included — understand this important news story a little more, especially when it comes to the players involved. But who is Dominic Cummings, and what does he have to do with the whole Brexit debacle?

Cummings was born in Durham to an oil-rig project manager and a teacher of children with additional needs, The Independent reports. And it seems that a future in politics was not exactly what he planned on. After graduating from Oxford University in 1994 with a First in Ancient and Modern History, Cummings moved to Russia, where he stayed for three years, and began work on various projects, including an attempt to set up an airline. He then went on to become the campaign director of Business for Sterling, which the BBC described as an anti-Euro campaign organisation set up in the early 2000s to prevent Britain from adopting the European currency.

Shortly thereafter, Cummings was headhunted by then Conservative leader Iain Duncan Smith to be the party's head of strategy, The Economist reports. But this position was extremely short-lived. Cummings quit after eight months on the job, calling Smith "incompetent," and "a worse prime minister than Tony Blair." The Economist describes how Cummings went on to retire "to an underground bunker in Durham to study Russian literature and Thucydides."

After the 2010 election, Cummings was sought out again by the Conservatives, this time by then Education Secretary Michael Gove, who appointed him as his chief of staff, according to The Guardian. The newspaper reports that this decision was initially blocked by Andy Coulson, but went ahead once the then director of communications resigned.

Five years later, the BBC reports, David Cameron promised a referendum on the EU if the Conservatives were to win the upcoming general election. They did win, and with that came the beginnings of Brexit and the formation of Vote Leave, which was founded by Cummings and political strategist Matthew Elliott, The Guardian reports. I don't think I need to give you a rundown on what happened next.

What I will tell you, though — and prepare to be shook — is that the infamous red-bus slogan about £350 million and the NHS (which the Office of National Statistics has since declared as "potentially misleading") was, according to The Independent and various other news sources, courtesy of Cummings, not Boris Johnson and Nigel Farage, as I (and many others) had previously believed. The more you know.

And while there's been very little comment from Cummings since the referendum result and the scandals that have followed, the strategist did tell The Guardian that he had not seen Brexit: The Uncivil War, and had "nothing to say about it."

However, his wife Mary Wakefield has been somewhat more open in talking about the film, having spoken with the man portraying her husband for a piece in The Spectator last month:

"I took the role because of the script," Cumberbatch told Wakefield. "I've been a big fan of James Graham from This House onwards and I thought how extraordinary that I'm reading a script that reads like a thriller when I know the outcome. I'm being sucked into it — these characters, their intelligence, the wit of it, the emotional power of the drama. I realised this is what drama can do at its best."