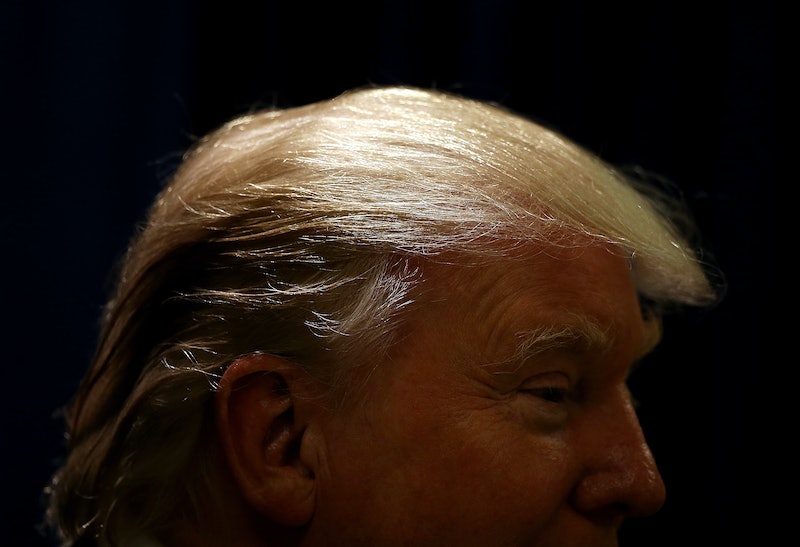 When you think of Donald Trump, it's almost impossible not to think of his hair. While some men experiment with trendy cuts, Trump has been rocking the same iconic 'do for decades. It's a captivating sculpture of wispy straw-colored strands that swoop and swirl in seemingly impossible angles, and appears to hover just above his scalp. So who do we have to thank for this coiffed masterpiece? You may be surprised by who cuts President Trump's hair.

In 2004, Trump told Playboy magazine that his wife, first lady Melania Trump (who was his fiancée at the time), was responsible for cutting his hair. "She's much more artistic than my hair would indicate," he said in reference to Melania's haircutting skills. "But she believes that if you like something the way it is, you should leave it. She doesn't fool with the hair. She's not trying to reinvent the wheel."

It's unclear if Melania still cuts Trump's hair; the White House did not immediately return Bustle's request for comment. In 2016, however, the Hollywood Reporter claimed both Trump and Melania were thought to be clients at L'Appartement, a salon reportedly owned by Tiffany Kaljic and located across the street from Trump Tower in Manhattan.

But the Hollywood Reporter also shared an account from an unnamed New York stylist who'd claimed Trump had not allowed them to touch his hair during a magazine photoshoot some years back. "He said, 'You can spray but don't touch! The only one I allow to touch my hair is Melania,'" Hollywood Reporter reported the stylist said.

But while Trump's hairdo may look complicated, he's previously described the process of styling it as being fairly simple. "I get up, take a shower and wash my hair," he told Playboy in 2004. "Then I read the newspapers and watch the news on television, and slowly the hair dries... I don't use a blow-dryer." According to Trump, it takes about an hour for his hair to air dry.

"Once it's dry I comb it," he continued. "Once I have it the way I like it — even though nobody else likes it — I spray it and it's good for the day."

The hairspray, it seems, is a vital component of the sculpture that is Trump's 'do. In fact, he once bemoaned former President Barack Obama's environmentalism as well as regulations on aerosol hairspray at a 2015 rally in South Carolina. "I'm in my room in New York City and want to put a little spray," he said. "But I hear they don't want me to use the hair spray. They want me to use the pump [instead of] the other one, which I really like better... And then [the pumped product] comes out in big blobs and then it's stuck in your hair, and you say, 'Oh, my God, I gotta take a shower again, my hair's all screwed up.'"

"I wanna use hair spray!" he told the crowd.

Trump is reportedly so particular about his hair that he doesn't like others, even professionals, to even touch it. In 2016, Amy Lasch, who worked for two seasons as a hairdresser on The Apprentice, told the New York Post that Trump showed up on set with his hair already styled. "It's as if he got ready somewhere else first," she said, noting that she knew to ask before even touching one finger to his hair. "If I noticed a flyaway that the camera was sure to pick up, I would hold a large mirror up to Donald and ask, 'Do you want me to fix it?' I knew damn well — ask before I raised a finger to that hair."

But what about that color? In his book Fire and Fury: Inside Trump's White House, journalist Michael Wolff claimed Trump's daughter, Ivanka, spilled the beans about her father's 'do:

She often described the mechanics behind [Trump's hair] to friends: an absolutely clean pate — a contained island after scalp-reduction ­surgery — surrounded by a furry circle of hair around the sides and front, from which all ends are drawn up to meet in the center and then swept back and secured by a stiffening spray. The color, she would point out to comical effect, was from a product called Just for Men — the longer it was left on, the darker it got. Impatience resulted in Trump’s orange-blond hair color.

While the president has always maintained that he doesn't wear a wig and that his hair is in fact his, many have remained skeptical. In fact, debate and speculation as to whether or not it's real has, over the years, led many an interviewer to reach out and give it a yank and then certify that it does indeed feel like real hair. It seems as if Trump's hair is almost as talked about as Trump himself.