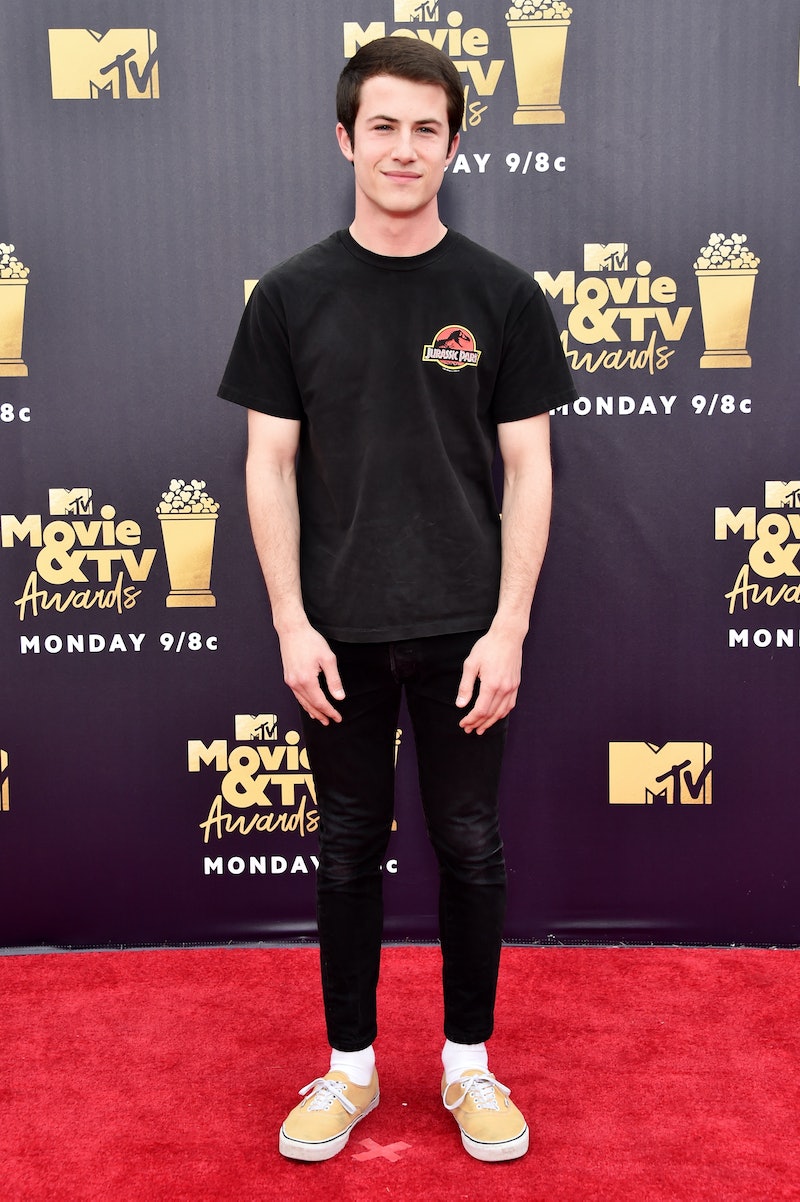 After marathon-watching the first two seasons of 13 Reasons Why (possibly more than once) in preparation of Season 3's debut, it's understandable if fans of the show have developed a little crush on lead actor Dylan Minnette, who plays Clay Jensen, one of the nice and good-hearted — if a little misguided — students at Liberty High. As fans gear up for the third season of the Netflix show to premiere on August 23, naturally, the question on every fans' mind is: Who is Dylan Minnette dating in 2019?

It turns out that Minnette has a new woman in his life, and it seems like they're in it for the long haul. Minnette is currently dating Lydia Night, lead singer of pop band The Regrettes. The pair have been cozying up together for several months, and they're not hiding it, making frequent appearances on each other's Instagram accounts.

While it's not known exactly when Minnette and Night started dating, the couple have been linked together ever since they were spotted on a low-key date night at Knott's Scary Farm back in October 2018. "Dylan and Lydia were spotted getting cozy at Knott's Scary Farm on Oct. 6," E! News reported. "The two held hands and at one point Dylan was rubbing her back. They exchanged a couple of kisses outside one of the mazes." Later that night, Minnette posted a birthday wish to Night on Instagram, with a photo of him lovingly gazing at her. It certainly looks like the start of an romantic relationship.

However, the news of their budding romance came as a slight shock for some fans, who were under the impression that Minnette was still with his former long-time girlfriend, Ray Donovan actor Kerris Dorsey. As of May 2018, Minette and Dorsey had reportedly been dating for a few years. According to Seventeen, they initially got together when they were filming 2014 film Alexander and the Terrible, Horrible, No Good, Very Bad Day (they played brother and sister in the film).

Although they appeared on red carpets together, they were much more vague about each other on social media, save for artsy photos of the two like the one Dorsey shared in April 2018. It's currently unknown exactly when they broke up, but both of them seem to have moved on from their relationship.

As for Minette's current girlfriend, Night, the two have more similarities than might meet the eye. The 13 Reasons Why star might be best known as an actor, but he is also a musician who plays in his own band, Wallows, meaning he surely has a lot in common with the singer. He even recently gave a shout out to The Regrettes' new album on Instagram with a loving tribute.

"i've had the honor to be able to sit alongside lyd for the majority of the recording process, and i’ve never seen someone work so tirelessly, passionately, patiently, fearlessly or effortlessly on anything," he wrote in his Instagram caption. "Her hard work and, well, love for what she does is honestly what keeps me going and inspired to do, and be, the best i can at everything i try."

Young love may often be fleeting, but Minnette's love life is clearly thriving and it's so heartwarming to see, especially considering his on-screen counterpart hasn't always been so lucky.

More like this
Who Is 'Umbrella Academy' Star Elliot Page Dating After His Divorce?
By Jake Viswanath
At 28, Emma Thompson Was Already A Star — But Unhappy In Love, Actually
By Olivia-Anne Cleary
‘Bridgerton’ Stars Nicola Coughlan & Luke Newton Got Polin Fans In A Tizzy
By Stephanie Topacio Long
‘RHOA’s Shereé Whitfield’s Boyfriend Tyrone Gilliams Hinted He’s Single
By Brad Witter
Get Even More From Bustle — Sign Up For The Newsletter