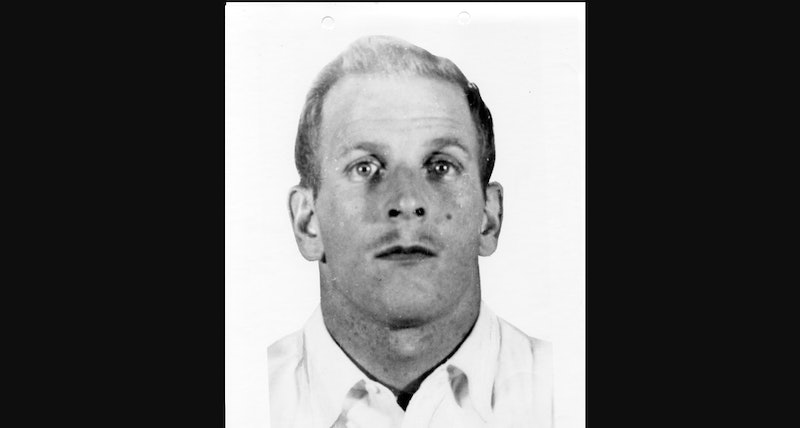 It's no secret that true crime shows have taken the country by storm, and the latest installment from Paramount Network promises to be one of the genre's most ambitious undertakings yet. It Was Him: The Many Murders of Ed Edwards premieres on April 16 on Paramount Network and theorizes that a relatively unknown serial killer is allegedly connected to several famous, still-unsolved cases — including those of the Black Dahlia, JonBenét Ramsey, and the Zodiac Killer. But who is serial killer Ed Edwards?

Edwards was born in Akron, Ohio, on June 14, 1933, per the Wisconsin State Journal. His mother reportedly committed suicide when Edwards was around two years old, after which he was placed in a Catholic orphanage and allegedly subjected to bullying and abuse, according to the Paramount documentary.

His violent upbringing turned into a crime-riddled life. According to ABC News, Edwards claimed that he escaped from an Akron jail in 1955 by pushing past a guard. Then, in 1961, Edwards was placed on the FBI's Most-Wanted list for alleged "unlawful interstate flight to avoid confinement after a robbery conviction" per the Wisconsin State Journal. He was later arrested in Atlanta on January 20, 1962.

Edwards was released on parole five years later, per ABC News. He married a woman named Kay, with whom he had five children, according to People magazine.

In 1972, Edwards wrote a book called Metamorphosis of a Criminal, in which he discussed his life of crime. He began touring the country and speaking about his alleged reformed ways, according to People.

In the same People article, his daughter April Balascio described her father as "very good-looking" and a "ladies' man." "People in the community liked him," she continued, "which always bothered me because he was saying one thing and doing another."

Edwards charmed his way onto a game show in 1972 — the quiz show To Tell the Truth, per People, during which the contestants had to guess which of three men was an ex-con who had written a book (spoiler: it was Edwards).

But, things would turn sour for Edwards before long. According to the show People Magazine Investigates on Investigation Discovery, in an episode titled, "My Father, The Serial Killer," Balascio eventually came across a report on a cold case in Wisconsin referred to as "The Sweetheart Murders," and believed her father, who at the time worked at the venue where the couple was last seen, was allegedly responsible. “I started hyperventilating,” she told People. “Because that was the moment it really hit me that my dad was the horrible, horrible person that I’d always suspected him of. I just never had the proof.”

After making her shocking discovery, People reported that Balascio called Chad Garcia, the original investigator on the case, and Edwards was taken into custody in July 2009.

ABC News reported that, in early 2010, Edwards claimed he had killed four people. In 1977, William Lavaco and Judith Straub in Sterling, Ohio, and, in 1980, Tim Hack and Kelly Drew in Wisconsin, whose killings were known as "The Sweetheart Murders."

Then, in a 2010 interview with the Associated Press, Edwards claimed to have killed his foster son, Dannie Boy Edwards, in 1996 for the life insurance money. "I've always been into crime," Edwards said in an interview with the Geauga Maple Leaf, a local Ohio paper. "And with Danny, I saw an opportunity ... I set it up to collect the money and ended up getting $250,000 out of it. And it was arranged, it was pre-meditated, it was thought-out, it was planned, and that's what I did."

Edwards was convicted of murder and sentenced to life in prison. In 2011, Edwards died in an Ohio prison of natural causes, according to Wave 3 News.

Edwards only confessed to five murders and after claiming to have killed his foster son said, "There is nothing else ... His is the last one," per the Associated Press. But, his name has been brought up in conjunction with many other murders. In the trailer for the six-part Paramount Network documentary, It Was Him: The Many Murders of Ed Edwards, veteran police detective John Cameron claimed that Edwards was allegedly responsible for other murders, including but not limited to those of JonBenét Ramsey, the Black Dahlia, Laci Peterson, and even the victims of the Zodiac Killer. Over the course of the series, Cameron and Edwards' grandson, Wayne Wolfe, will examine the cases to see if there is an alleged connection.

Tune in to It Was Him: The Many Murders of Ed Edwards on Monday, April 26, at 9 p.m. ET to find out more about this terrifying serial killer.