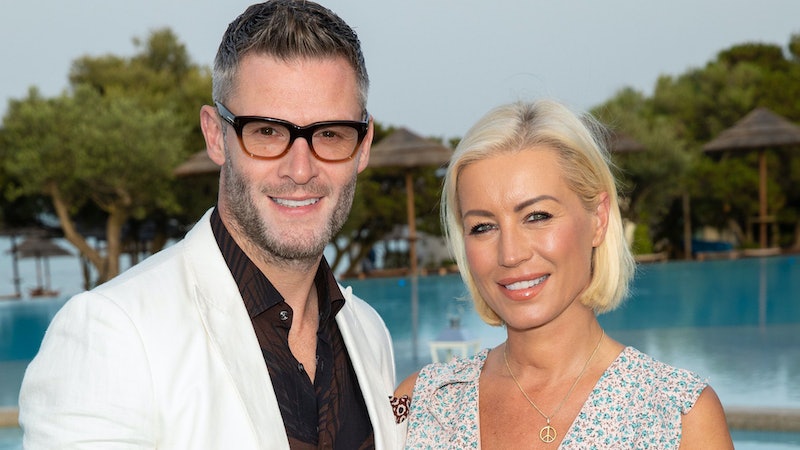 Celebrity Gogglebox gives viewers a chance to experience how celebs are 'just like us' when watching television, but it also provides a little sneak peek into how they interact with their family and significant others in a more natural setting. One relationship that I've absolutely fallen in love with is between Eddie Boxshall and Denise Van Outen, whose banter continues to lighten up my Friday evenings. But who is Eddie Boxshall, and how did he and Van Outen first meet?

Other than seeing him on the red carpet alongside his other half — and now on Celeb Gogglebox — Boxshall's career doesn't involve any cameras or presenting. According to The Sun, Boxshall is "a commodities trader from Essex who specialises in the oil business", which sounds interesting and complicated AF. Even though their work lives are pretty different, they met without any prior knowledge of each other thanks to a blind date. "All I'd been told was that I would be meeting a woman called Denise, I had no idea it was Denise Van Outen," he told Hello! magazine (via the Daily Mail) in 2017. "When I saw that it was her, it came as a surprise — a lovely one."

"To be honest, it was an advantage not knowing too much about her career because it meant there was even more for me to find out about her. The chemistry, for me, was definitely there and I couldn't wait to see her again."

The couple began dating in 2014, as the newspaper reports, following Van Outen's divorce from actor Lee Mead. "When I found myself single and just about to turn 40, I didn't want to be on my mobile, swiping left and all that business," Van Outen said. "Constantly talking on the phone and messaging each other is a waste of time, you might as well go and meet the person and you'll know within the first half hour if it will work or not. With Eddie I knew within ten minutes — we just clicked. All my best times with him are when it's just the two of us."

Bosxhall and Van Houten have also only recently moved into together for the first time, as was detailed in an exclusive interview with Hello! earlier this year. "Living together feels just right for us now," the presenter told the magazine. "Some people might think: 'They've taken their time,' but we never felt the need to rush. We're both parents and in our mid-40s. We wanted our relationship to progress naturally." She continued:

"This is our first place together. Finding it, doing it up and settling in as a family has been so exciting. We couldn't be happier."

And you can see that encapsulated perfectly whenever they're on screen together on Gogglebox. Whether it's them arguing over the right way to use coasters, Boxshall hiding Van Outen's favourite sweets from her so he can eat them, to their seemingly shared distaste of Basildon, the bants between the two is so strong and such a pleasure to watch.