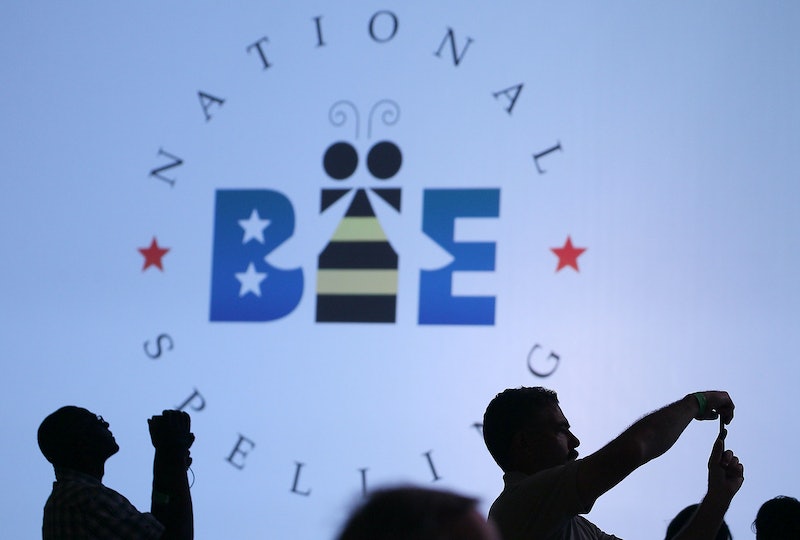 This week, hundreds of children have arrived in the Washington, D.C. area to participate in the Scripps National Spelling Bee. The Bee will kick off on Wednesday and many people are excitedly waiting to watch one speller in particular — the youngest contestant, Edith Fuller, who, at six years old, is the youngest-ever contestant to qualify for the Bee.

Fuller is from Tulsa, Oklahoma, and actually qualified for the National Spelling Bee while she was just five, after competing in a regional contest in March. In that contest, Fuller out-spelled over 50 other elementary and middle school students to secure the regional championship and land a bid to the National Bee.

According to ABC, Fuller is a homeschooled student who prepared for the Bee by practicing with her mom, Annie, using prep materials provided by Scripps. In an interview with KJRH TV, a television station in Tulsa which organized the regional bee, Fuller described her straightforward method of prepping for the bee, saying "My mommy asked me words, and every time I misspelled one, I would look at it." Fuller's mother also noted in an interview with Tulsa World that she knew her daughter had a knack for spelling after she correctly spelled the word "restaurant" at a family dinner last summer, despite never being taught the word.

Fuller is receiving a great deal of attention for her significant accomplishment of qualifying for the National Spelling Bee at such a young age. Indeed, Scripps even noted its excitement for Fuller to compete, saying via Tulsa World, “The 90th national spelling bee is making history before it even begins with this pint-sized ‘spellebrity’... We have no doubt she’ll spell like a champ."

The first televised preliminary round of the Bee begins on Wednesday morning, with the finals following on Thursday. Provided she passes the vocabulary test that was administered to all spellers on Tuesday, Fuller will be taking the stage and competing against spellers significantly older than her. Indeed, the next oldest competitor at the Bee is eight-years-old and the vast majority of contestants fall into the 11 to 14 year-old range. Fuller is speller number 290 of 291, so she will likely wait quite a bit before going onstage to spell her first word.

Fuller's parents as well as her three younger brothers have accompanied her to the National Bee and will be proudly watching her in the audience. According to her father, Justin, the goal is simply to calm her nerves and ensure she has fun. Her father noted to NBC-2 that "We're trying to work things out so maybe she doesn't feel all that pressure...And we've already told her that if she misspells her first word and is out right away, we are still proud of her."

If you wish to watch Fuller and other spellers take the stage and spell their way to victory, you can tune in to ESPN on Wednesday starting at 8 a.m. EST for the first televised preliminary round.