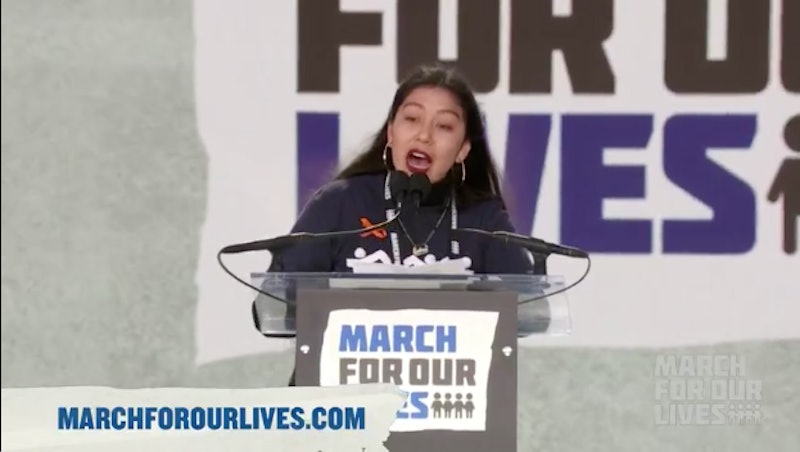 On March 24, cities and towns throughout the United States and around the world took part in the March For Our Lives, a massive demonstration in support of gun control. And if you're watching all the speeches by students and Parkland survivors from Washington, D.C. on Saturday afternoon, you might be wondering who Edna Chavez is, because she made a very big impression.

As NBC Los Angeles detailed this week, Chavez, 17, is a high school student and activist, and she joined with many of the student survivors of the Stoneman Douglas High School shooting on Saturday to make a statement against gun violence, and in favor of tangible, systemic reforms.

Chavez is a member of an organization called Community Coalition, which advocates for social justice causes in Los Angeles. She is not one of the Parkland students, to be clear ― she's a resident of South Los Angeles, one of five teens who left from the Community Coalition center to the Washington, D.C. march.

In an emotional speech to the assembled crowd, Chavez described the shooting death of her own brother, and how painfully "normal" memorials to black and brown youth who've "lost their lives to a bullet" have become.

"I am a youth leader. I am a survivor. I have lived in South L.A. my entire life, and have lost many loved ones to gun violence," Chavez said. "This is normal. Normal to the point that I learned to duck from bullets before I learned how to read."

"My brother, he was in high school when he passed away," she continued. "It was a day like any other day. Sunset going down on South Central. You hear pops, thinking they're fireworks. They weren't pops. You see the melanin on your brother's skin go gray. Ricardo was his name. Can you all say it with me?"

The crowd responded to Chavez's request, breaking out into a chant of her late brother's name: "Ri-car-do! Ri-car-do!"

Chavez spoke with obvious passion and moral force, commenting on the persecution of communities of color in her native Los Angeles, and the normalization of lethal gun violence.

"How can we cope with it, when our school district has its own police department? Instead of making black and brown students feel safe, they continue to profile and criminalize us. Instead, we should have a department specializing in restorative justice," Chavez said. "We need to tackle the root causes of the issues we face, and come to an understanding of how we resolve them."

Chavez continued by saying that she was present to "honor" the students of Stoneman Douglas, as well as her late brother, and Stephon Clark, an unarmed black man fatally shot by police in Sacramento, California on March 18. She then addressed America's policy-makers, describing what ideas she believes "will not work."

"Policy-makers, listen up. Arming teachers will not work! More security in our schools does not work! Zero-tolerance policies do not work! They make us feel like criminals," she told the massive audience.

"We should feel empowered and supported in our schools. Instead of funding these policies, fund mentorship programs, mental health resources, paid internship and job opportunities. My brother, like many others, would have benefitted from this. So let's make it happen."

Finally, at the conclusion of her speech, Chavez repeated her own name, and implored the crowd to remember her, and the faces of the students who showed up to protest.

"Mi nombre, my name is Edna Lizbeth Chavez. Remember my name, remember these faces. Remember us, and how we're making a change."