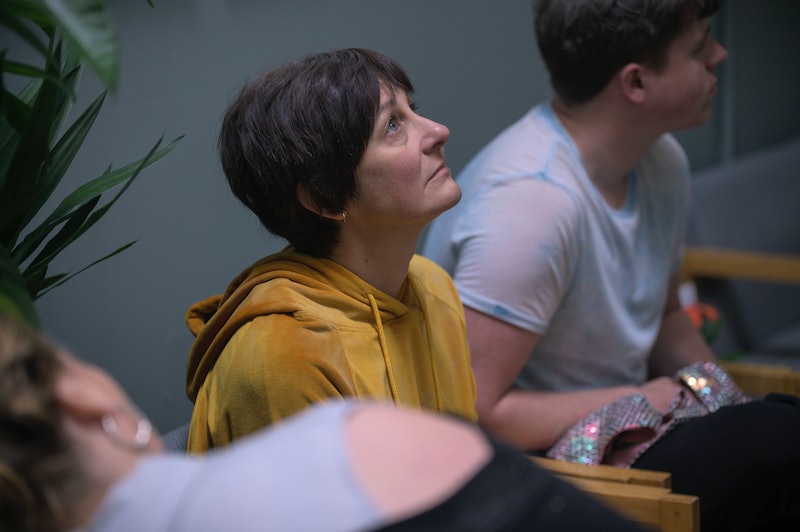 If you're after a gripping drama to fill your Thursday evenings, look no further than Channel 4's The Accident. Set in a fictional Welsh town, the series will explore how the town's community deals with a tragic event. Eiry Thomas plays Greta, the old friend of Polly (played by Sarah Lancashire) who has become entangled in the situation through her husband, a local politician. But who is Eiry Thomas?

Born and raised in Cardiff, the Welsh actor has over thirty years of experience across film, TV, theatre, and radio. Most recently, Thomas starred in the S4C hit Keeping Faith as DI/PC Susan Williams and also has a regular role on the broadcaster's drama series Teulu. With two BAFTA Cymru awards for Best Actress under her belt, Thomas is one of Wale's leading actors.

As the Royal Welsh College of Music & Drama writes, Thomas also uses her acting experience to teach classes as a theatre workshop tutor. She was also a founding member of the Welsh performance company Theatr Pena, which was formed in 2008 "by a group of friends with nothing but a shared love of classic plays and a determination to create opportunities in theatre for women."

Sadly, the company had to close earlier this year due to lack of funds. Still, their influence will undoubtedly be remembered — especially for the opportunities they gave women wanting to work in the theatre industry. As the company described in a piece detailing their closure, the majority of their production team and board members were women, and their "casts have been either all women or 50:50 and at the heart of each play we have chosen are female characters."

This theme seems to have continued into Thomas's work outside the company, especially with The Accident. Led by Sarah Lancashire (who plays Polly Bevan), the series also features Joanna Scanlan, Sidse Babett Knudsen, Genevieve Barr, Kimberly Nixon, and Ruth Madeley. For Thomas, her role sees her play Greta, who is one of Polly's closest friends, according to Radio Times. There's not much more detail other than that, but as Thomas previously told Wales Online, she has a tendency to play honest characters.

"It seems that I tend to play characters who are 'truth sayers', almost like a comedy maid role," she said. She then related this back to the character's she's played in Teulu and another S4C series, Con Passionate. "Eirlys [Teulu] and Helen [Con Passionate] are similar in that respect. Although Eirlys is in control and Helen is out of control, they both speak their mind without a thought for the consequences. Debbie Weaver, the young grandmother I play in the BBC Wales series Belonging, is like this as well."

Maybe this could be a precursor for her character's motives in The Accident? Viewers will just have to wait and see.