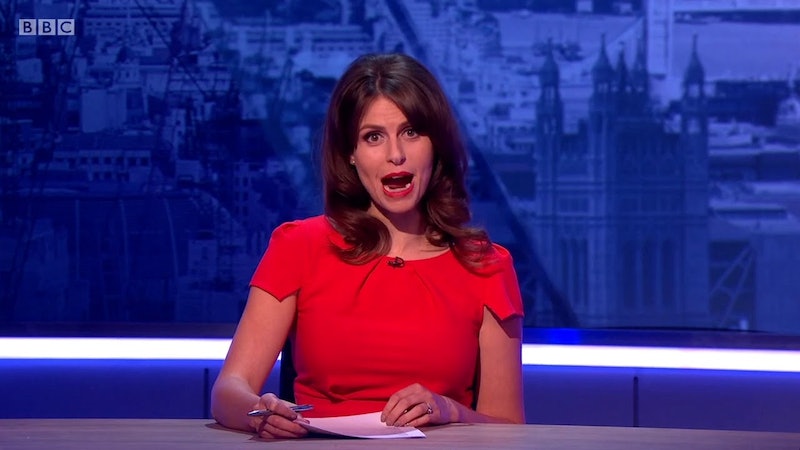 If I've said it once I've said it a thousand times — and probably then some — but wow, women are killing it in the entertainment world RN. If it isn't excellent content written by women, it's TV shows fronted by badass female characters. And if that's not enough, funny gals have come to the front in the comedy world as well. Not only on the stage but also in terms of the formerly decidedly masculine panel show format. Hey, we're even getting a shot co-hosting hit shows like The Mash Report. So who is Ellie Taylor, the hilarious host on this hit BBC show? Because this woman is everything and I must know more.

Taylor is a comedian, TV host, and occasional radio host. Her initial foray into the media world was actually as a model. She fronted campaigns for Matalan, Asda, and Pantene, according to the Evening Standard, but found the experience less than desirable.

Speaking to the Standard about the whole experience and how she didn't feel as though the role was the right one for her, Taylor said:

"I'm quite ungainly. I'm tall, uncoordinated and awkward, which I can use on stage, but to pose and be pretty I felt very uncomfortable. I hated having my photo taken when I wasn't in control."

So after what proved to be a fairly short sojourn into the modelling world, Taylor chose to dip her toe into the event management world. During that time, she took the leap into stand up, which, as you can tell from where she is now, worked out very well.

Not only is she still touring and doing hit shows, but she has appeared on the likes of Live At The Apollo, Mock The Week, QI, Plebs, Drunk History, and then some.

However, the show she is probably best known and loved for is The Mash Report, which is returning to our screens for a third season. The Mash Report is a satirical political comedy show — and, considering the times we live in, this BBC series is literally overflowing with material RN.

Taylor spoke about the show to NME and explained that, as with the news and the world around us, the TV show is super changeable at any time. Which makes for a very exciting experience:

"It's so current, because we record it on the Wednesday and then it goes out on the Thursday and things are being amended and changed, right while we're recording even. So we'll be trying new things on the floor, the jokes will be changing from the way we've done it in rehearsals."

Obviously a show like this, which is in a similar vein to the U.S.'s The Daily Show, is just the tonic the UK needs during incredibly uncertain times. Taylor spoke to NME about the show's format being a bit different to the usual style of UK current affairs comedy programming, saying:

"It feels really exciting and relevant. And also necessary at the moment actually – it's just a really good way for people to digest what's going on. I think that Britain does panel shows so well, but it’s nice to have a format that’s slightly different."

This show will help you laugh instead of crying about the state of the world and especially the state of UK politics.