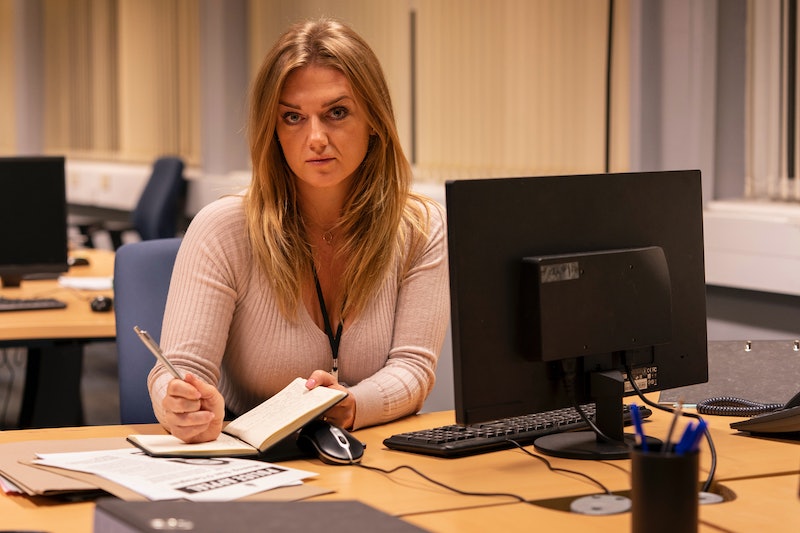 The mysterious real-life case of Sian O'Callaghan continues in ITV's A Confession tonight, with detective Stephen Fulcher (Martin Freeman) getting even closer to the truth surrounding the young woman's disappearance. One of Fulcher’s colleagues at the police station is played by an actor whose face you may well recognise, particularly if you’re a fan of British true crime dramas. She’s appeared in other projects written by A Confession's creator Jeff Pope, including Little Boy Blue and The Moorside. So who is Faye McKeever, and what else as the she starred in?

Born and raised in Manchester, McKeever began her acting career in 2006 where she landed a role in the "late night edition" of Hollyoaks as The Sun reports, titled In The City. The newspaper notes that she also starred in the 2008 series Massive, "which lasted for six episodes."

However, you'll probably recognise her most from the Sky One comedy Trollied, where she played Linda Stubbings who worked on the customer service desk of the fictional Valco supermarket. "Linda's really in a double act with Sue (played by Lorraine Cheshire) and we're the customer service girls. We stand at the front of the shop, serve the customers and have a good old gossip about people in magazines and people who walk past," the actor told Female First in 2011. "We've got a really lovely relationship, sometimes we'll have arguments, sometimes we'll be laughing or crying. It's just a really nice relationship."

During this interview, her relationship with X Factor Shayne Ward was brought up. As The Sun reports, the couple met "before either of their careers took off, and dated from 2003 to 2014". McKeever spoke very highly of her then-boyfriend to Female First, where she also opened up about being known as just Ward's boyfriend. "It doesn't bother me," she said. "I've worked hard to be where I am today, I did acting through college and university, and it's always something I wanted to do, even before I met Shayne. It's just that Shayne got the bite of the cherry before I did."

"I learnt a lot from Shayne and him being thrown into the media at such a young age, so it's been more a benefit than anything really. It doesn't bother me at all if people recognise me for being Shayne's girlfriend or for being on Trollied."

Since her role on Trollied, McKeever has starred in two dramas inspired by real-life events — Little Boy Blue and The Moorside. In Little Boy Blue, the actor played the mum of one of the boys involved in 11-year-old Rhys Jones' murder in 2007. "For her to come forward when it was needed the most took a lot of courage," McKeever told The Sunday Post in 2018. "It was a brave thing to do when there was such a wall of silence in Liverpool. And also when it potentially meant seeing her son jailed."

"There is such a responsibility to get these things right when they are based on real events. Rhys's death shocked everyone. I was 22 at the time and remember it like it was yesterday."

This respective outlook is followed in A Confession, in which McKeever portrays Deborah 'Debs' Peach, one of Fulcher's colleagues at the police station. McKeever recently shared a snap of her and the real Deborah Peach on her social media. "Here's me and the lovely Debs Peach who I had the privilege to play in the show," the caption reads.

A Confession continues tonight on ITV at 9 p.m.