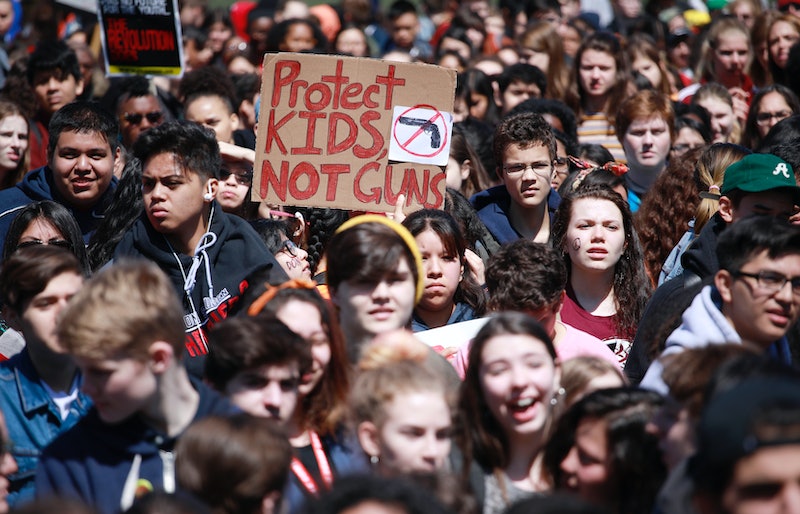 After she faced disciplinary action for walking out against gun violence, high schooler Gabrielle Anzalone decided to take it further in making sure students' voices are heard. Come May 15, there might be a new, youngest member on the Lindenhurst Board of Education. Anzalone is running for office after she and 35 other students at Lindenhurst High School in New York were suspended for walking out of school. March 14 was the one-month anniversary of the Parkland school shooting and school walkouts occurred across the country. Later, New York Gov. Andrew Cuomo requested that Anzalone's district rescind the punishment for students who walked out against gun violence, reported Newsday.

Anzalone has made it clear though that it's not the suspension that triggered her decision to campaign for a spot on the Lindenhurst Board of Education. What really propelled her decision was the disconnect between the students and people who oversaw their education. "In no way is this a knee-jerk reaction or me trying to spite the board," Anzalone told BuzzFeed News. "I knew I was going to get suspended and was fine with the repercussions. What bothered me was there was no communication between us, the school, and the school board. Our voices weren't being heard."

If she joined her school district's Board of Education, Anzalone would also have the chance to bridge the generation gap between board members and students — a gap she says negatively affects students. "The people on the board haven't been in school in over twenty something years," Anzalone said to Buzzfeed News. "They don't understand the issues students are facing."

A senior at Lindenhurst High School, Anzalone is competing against Josephine Martino for the open board seat. Martino, 44, is a parent and ex-PTA leader of another school, reported CNN. The winner of the election would hold the position until June 2020. Anzalone, who is 18 years old, will graduate in a month and if elected, would serve as the board's youngest member.

Anzalone told CNN, Buzzfeed News, and other media outlets that she's not a single-issue candidate: Her goal is solve budgeting issues and school problems through creative means. Her campaign priorities include improving technology in schools, better accommodating LGBT students and parents who don't speak English fluently, and reducing the focus on Common Core standards.

In preparation for that day, as principal, I've met with the school administration, as well as members of student leadership, to plan an event that allows students to have their voices heard, while ensuring a safe and secure environment. As student safety is our greatest concern, the district does not condone a walkout of any kind.

In the letter, Grant encouraged students to instead pay tribute to the Parkland school shooting victims by signing a poster board for Marjory Stoneman Douglas High School and by joining a memorial led by student council. "I emailed my principal telling him I was fully aware of the repercussions but would still follow through with my plan to walk out," Anzalone told CNN. "I understood the school's concern for safety, but the suppression of our voices is perhaps what bothered me the most."

On the day of the walkout March 14, Anzalone and thousands of students across the country walked out of class to pay tribute to the victims of the Parkland school shooting and to demand gun policy reform. On Feb. 14, a 19-year-old gunman walked into Marjory Stoneman Douglas High School in Parkland, Florida and killed 17 students and faculty. For the demonstration one month later, students planned 17-minute walkouts, a minute for each of the lives lost in the Parkland mass shooting.

Grant told Newsday that although he was "terribly disappointed to learn that a member of his student body felt as if she was not being heard on this matter," he admired students like her. The district feels strongly that students should pursue causes they feel passionate about, he added.