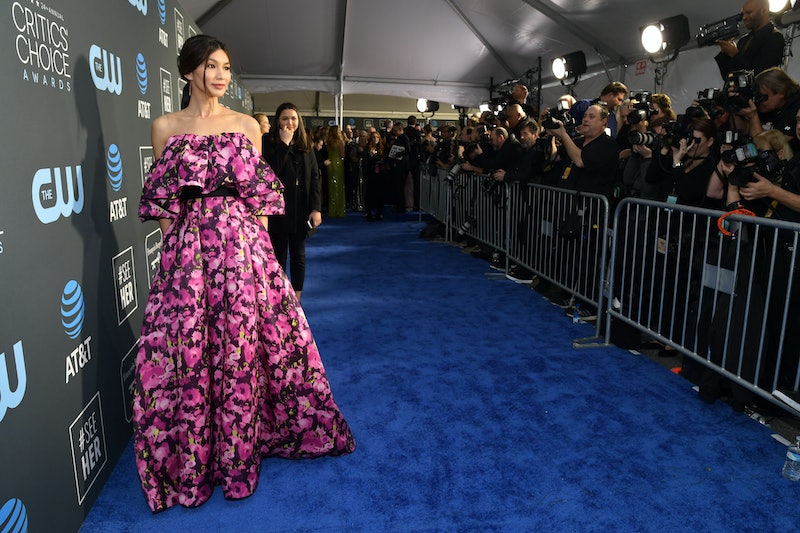 The Crazy Rich Asians cast will be hitting the red carpet at the Screen Actors Guild Awards Sunday. While the romantic comedy was snubbed at the Academy Awards nominations, this will be a nice opportunity to see the cast together — and maybe even with their own romantic partners as guests. Crazy Rich Asians and Mary Queen of Scots star Gemma Chan is reportedly dating fellow actor Dominic Cooper, who most recently starred in Mamma Mia! Here We Go Again.

The two likely became acquainted after co-starring in the 2017 thriller Stratton, and sparked dating rumors in summer 2018, when they were spotted together in Spain, and then later near Cooper's home in London. In December, Chan and Cooper attended a British Fashion Awards afterparty together. But Chan has not explicitly confirmed the relationship, preferring to keep her private life private.

"On the one hand I know that part of it comes with the territory and I understand there can be interest in that side of your life," Chan said in an interview with Virgin Atlantic's in-flight magazine Vera, according to The Daily Mail. "But my private life is always something that has been private for my own sanity. I try and live a very normal life." She also joked about pressures to settle down and start a family. "I’ve certainly been lying awake at night," Chan said, "thinking, "Oh my god, do I have a plan? Should I be making a plan?'"

You may also know Cooper as Howard Stark in the Marvel Cinematic Universe, as well as from AMC's Preacher, The Duchess, The History Boys, and Abraham Lincoln: Vampire Hunter. The actor has been linked with co-stars in the past, including his Mamma Mia! love interest Amanda Seyfried. He recently split from longtime girlfriend and Preachers love interest Ruth Negga, who he appeared with in Breakfast on Pluto and then starred with in a production of Phaedre at London's National Theatre in 2009. The split, according to both parties, was amicable.

"Working with ex-girlfriends?," Cooper said in an interview with The Irish Times. "What's the alternative? Sulk in a corner? There’s no other option. Ultimately, you’re friends."

Chan is also still friends with her ex — she previously dated British comedian and television presenter Jack Whitehall, who she worked with on the series Fresh Meat back in 2011. Both Whitehall and Cooper are close friends with James Corden — they're the only two that Corden trusts to play "Shock Therapy" on The Late Late Show. So I, for one, like to imagine that this is a happy set-up with absolutely no drama.

Cooper and Chan haven't been spotted out and about since early December, but that doesn't necessarily mean anything for them as a couple. Chan has been busy with awards season, and has the upcoming film Captain Marvel to promote.

Chan's character in Crazy Rich Asians goes through a romantic tragedy that will turn to a romantic triumph in the film's sequel, based on the book China Rich Girlfriend. Luckily, her real life doesn't seem to be nearly as full of ups and downs.