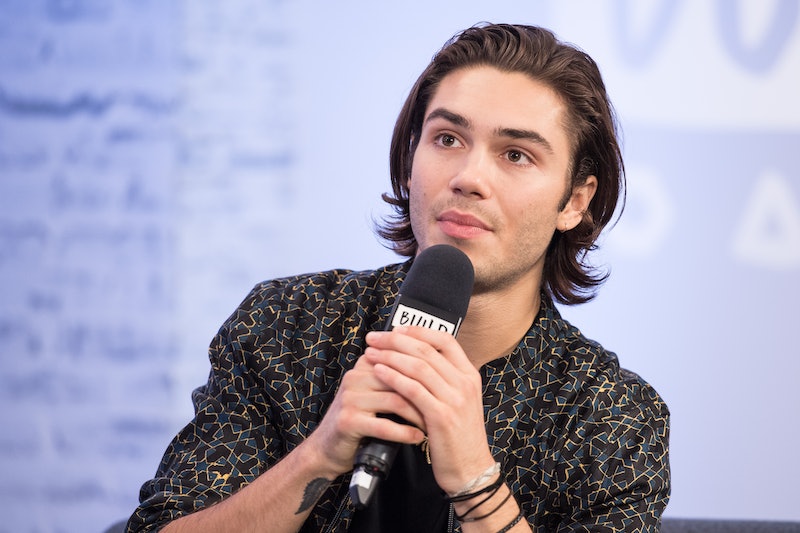 Your most recent swishy-haired heartthrob George Shelley has been getting a lot of admiration lately, and not just for his princely locks. The former Union J singer took a little career curveball recently when he hosted a BBC3 documentary on grief. The show has since gone on to inspire more honest conversations about death and the grieving process, and I'm so happy that Shelley has helped steer this change. Shelley's sure to be getting even more love when he appears on new BBC1 series Celebrity Painting Challenge, to the point where you'll routinely be wondering who is George Shelley dating?

The last person Shelley was reported to have been dating was uni student and model Matthew Holehouse. The Sun reported the exclusive on March 21, 2017, as a source told the paper: "George and Matthew have been together for several months now," adding: "They have been enjoying each other’s company and having fun together." As The Sun also reported, Shelley had come out as bisexual via an emotional vlog on his YouTube channel, which was posted to the site on Feb. 3, 2016.

In it, he revealed: "I’ve had girlfriends that I’ve loved and have been amazing periods of my life, but I’ve also had boyfriends. I just want you to know that, whether I’m with a girl next or with a guy, I love them and it shouldn’t be a big deal.”

Shelley went public with Holehouse when he posted a photo of the two of them on Instagram in a since-deleted posted. It was uploaded on April 12, 2017, as Attitude reported, during the couple's super bougie holiday to Costa Rica. I'm thinking that, since the snap's been deleted, things may not be as hot between Shelley and Holehouse anymore — however, Shelley's not been spotted with anyone else since.

The singer has been very open about his relationships prior to Holehouse, though. In an interview between Shelley and Sir Ian McKellen for The Gay Times, which was published on Christmas Day in 2018, Shelley told the actor that he shared one of his first kisses with a "boy at school in year six." He went on to say: "[W]e had a kiss behind the shed on the lips." He also revealed: "I actually lost my virginity to a girl, but when I was 21." The two have since gone onto become best pals: "We just connected as humans and we loved each other, and we still do. She’s my best friend."

Nowadays, Shelley's keeping his love life hush-hush, and focusing on his appearance in Celebrity Painting Challenge. He's competing alongside the likes of legendary cricketer Phil Tufnell, and model Amber Le Bon, as the BBC reported on Nov. 8, 2018. So, if he isn't already your former-boyband-member crush, then get prepared.

If you missed the first episode of Celebrity Painting Challenge, which aired on Thursday, April 4, you can catch up on BBC iPlayer. It's worth it just to see Shelley in an apron. Catch the show each Thursday on BBC1 at 8 p.m. until its finale on April 25.