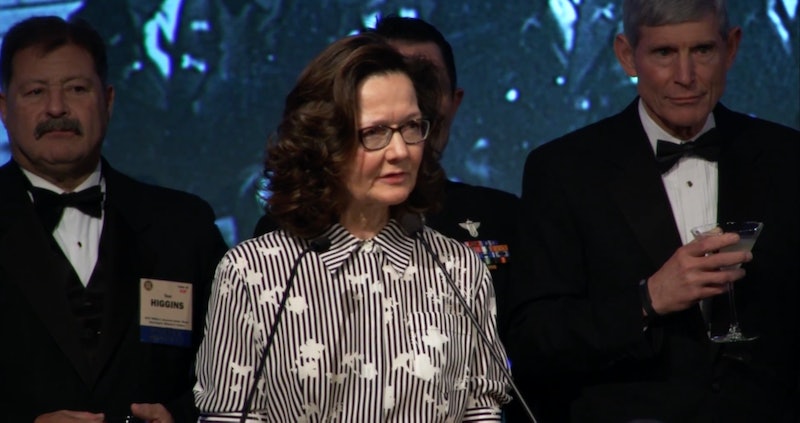 Early Tuesday morning, President Trump tweeted that he'd be replacing Rex Tillerson as Secretary of State with CIA Director Mike Pompeo. Taking over the Central Intelligence Agency in Pompeo's place will be Gina Haspel, the first woman to lead the CIA. Trump had announced Haspel as the deputy director of the agency last February — and at that time, The New York Times revealed she had a "leading role" in overseeing and covering up torture of alleged terrorists.

Haspel, who still has to be confirmed by the Senate, would be the first woman to hold the position since it was founded in 1947.

According to the Times report, Haspel was involved in overseeing the torture of detainees at a secret prison in Thailand in 2002. Following 9/11, Abu Zubaydah, an alleged aide to al Qaeda, was waterboarded 83 times at the CIA black site in Thailand. Abd Al-Rahim al-Nashiri, who was accused on bombing the USS Cole in Yemen in 2000, was waterboarded at least twice, and Khalid Sheikh Mohammed, accused of playing an integral role in the 9/11 attacks, was waterboarded 183 times.

In addition to waterboarding, the program also subjected dozens of alleged terrorists to other brutal forms of interrogation, including depriving them of sleep and "squeezing them into coffins," according to The New Yorker. Haspel was also reportedly involved in covering up the interrogation of Zubaydah and Nashiri via the destruction of video tapes in 2005.

In 2009, then-President Obama signed executive orders to close all of the CIA's secret prisons and ban coercive interrogation methods, including waterboarding. The following year, the Justice Department announced there would be no criminal charges brought against anyone involved in the destruction of the interrogation tapes.

However, more than a decade since these events took place, the European Center for Constitutional and Human Rights (ECCHR) asked the German Federal Public Prosecutor to issue an arrest warrant for Haspel. The civil rights group feels she should be held accountable for overseeing torture at the secret prison for years and failing to "do anything to stop it."

"Those who commit, order or allow torture should be brought before a court — this is especially true for senior officials from powerful nations," ECCHR's General Secretary Wolfgang Kaleck said in a statement, at the time Haspel was announced as deputy director. "If the deputy director travels to Germany or Europe, she must be arrested."

Trump has said in the past that he supports torture as an effective method to extract information from suspected terrorists. He told ABC News last year that waterboarding "absolutely" works, despite experts claiming the contrary.

"As far as I'm concerned," he said, "we have to fight fire with fire."