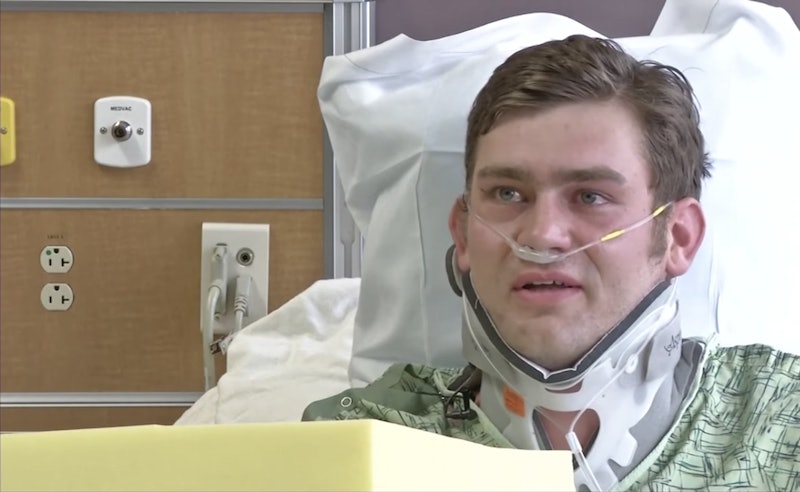 Kuchibhotla and his coworker Alok Madasani, both engineers of Indian descent, were each enjoying a Jameson beer on the patio of Austins Bar and Grill in Olathe, Kansas when they became the targets of an apparently racially-motivated hate crime. After enduring racial slurs allegedly being thrown their way by another patron by the name of Adam W. Purinton, the two men were later shot by Purington, who'd returned to the establishment with a gun after being ejected for his harassing behavior. Madasani was badly injured; Kuchibhotla's wounds resulted in his death.

Grillot, 24, a regular at Austins, was shot in the chest after reportedly trying to subdue Purinton after he opened fire.

"Initially I'd gotten under the table when he first started firing," Grillot recalled. "I thought I'd heard nine shots. Expected his magazine to be empty, so I got up and proceeded to chase him down. Tried to subdue him so that way the police could come him and do what they needed to do, and I guess I miscounted with everything going on. And I got behind him and he turned around and fired around at me."

Those who know Grillot were not surprised to hear that he stood up to Purinton. "I can definitely say he’s the kind of guy who would step up and intervene," his friend Tyler Lape told The Kansas City Star. Garret Bohnen, an employee at Austins, described Grillot as a "really good guy" who was "always one to diffuse stuff."

Grillot dismisses the characterization of his actions as heroic. “It’s not like that,” he said in an interview from his hospital bed. “I was just doing what anyone should have done for another human being. It’s not about where he was from or his ethnicity. We’re all humans. I just felt I did what was naturally right to do."

Madasani visited Grillot's hospital room following the attack, an experience Grillot says brought new meaning to his actions. "One of the gentlemen that survived, he actually came in here today and it was the greatest thing, I can't even describe it," he said, "Come to find out, he's also got — his wife is five months pregnant. So that was kind of a real — something was guiding me to do what I did, and somebody was watching over me and him."

Both Grillot and Madasani are hospitalized and in the process of recovering. GoFundMe campaigns have been created to help cover medical expenses for Madasani and Grillot, and funeral expenses for Kuchibhotla.