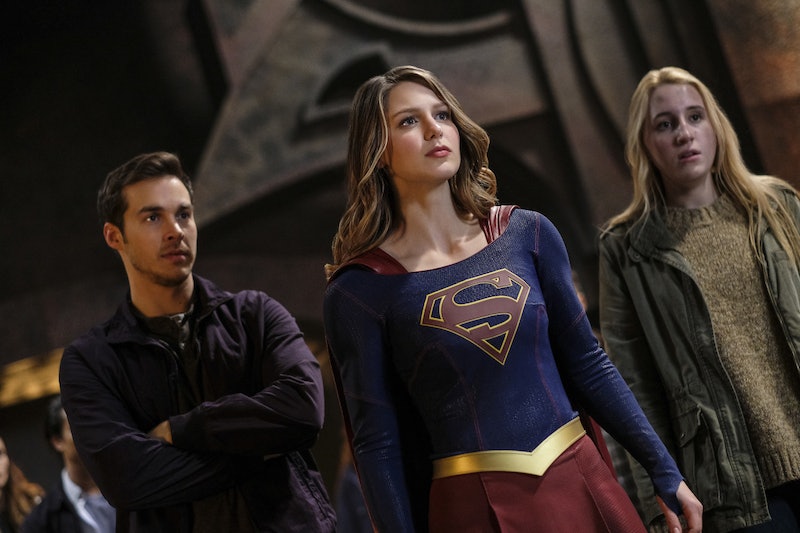 Supergirl is blasting off to another planet in the midseason premiere on Monday, Jan. 23, which finds Kara and Mon-El taking on the case of a missing girl named Izzy. Supergirl doesn't use its guest stars lightly, which is already a clue there's something going on here. When you add in the fact that, according to the episode description, Kara and Mon-El are transported to Slaver's Moon when they arrive at the place where Izzy was last seen, I think this new character may be part of something much bigger than it first appears.

Izzy is played by Harley Quinn Smith and yes, she is the daughter of notorious comic book fan Kevin Smith, who also directed the midseason premiere, "Supergirl Lives." The director posted a teaser for the episode on his Instagram with a missing poster for Izzy, who looks like an average teen. Is there more to this case than meets the eye?

Unfortunately, we don't know much about Izzy herself from the episode's synopsis, except that she's someone who has a story that moves Kara enough to help her and somehow connects to Slaver's Moon. She must be important in some way, right? Maybe Kara sees a little bit of herself in Izzy, because she's a girl who has powers and is afraid of them. Or perhaps the story is something that has to do with another alien race, and Izzy is part of it.

Luckily, Slaver's Moon is much less mysterious. As promos for the episode reveal, it has a red sun, which means that Kara and Mon-El can't use their powers there. And since the synopsis also teases that we run into none other than Roulette (Dichen Lachman), one of Kara's foils in earlier episodes, there's likely something more going on behind the scenes. Could Kara have been sent here because someone is trying to get her away from Earth? Or maybe that person is using Izzy as bait, in which case... poor Izzy.

Also, it seems that on Slaver's Moon, Kara and Mon-El will be facing a new kind of alien species called the Maaldorians. Smith posted another Instagram teasing these new aliens in the caption, who don't look that friendly. And I don't think they're going to welcome Kara to Slaver's Moon.

The other interesting bit of information in this episode is that Kara is, understandably, warned by Snapper Carr (Ian Gomez) to leave the case alone. Is this just because he wants her to stay out of something that, on the surface, doesn't involve her? Or does he have some ulterior motive?

I'm really curious to see how Izzy's character fits into the Supergirl world when she's introduced, and where her mysterious disappearance will take the rest of Season 2.