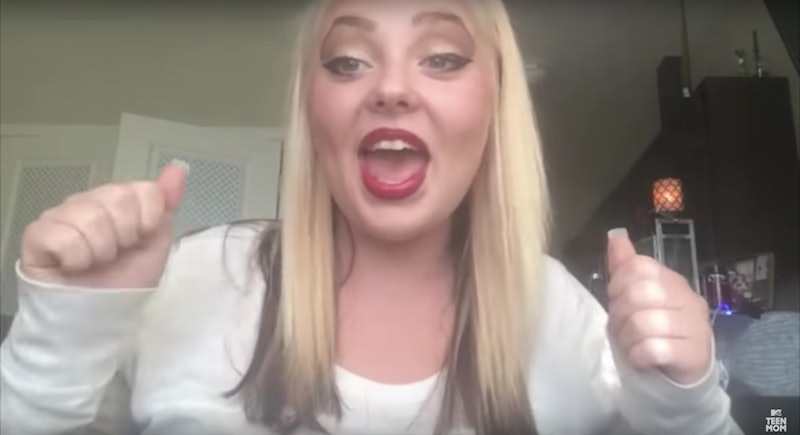 Teen Mom 2's 10th season premieres on Tuesday night, and when it does, the cast is going to look a bit different. After MTV severed ties with Jenelle Evans and her husband, David Eason following a few controversies, they've recruited new Teen Mom 2 star Jade Cline to take her place. But if you're an MTV fan, you've probably already seen her before.

In June, the network announced that Cline would be joining the show after previously starring on Young & Pregnant, a show similar to Teen Mom that also aired on MTV. It followed the lives and relationships of — you guessed it — women who were young and pregnant. Today, Cline is 22 years old and a mother to daughter Kloie, who turns two this month.

On Young & Pregnant, Cline's storyline was all about the ups and downs of her relationship with Kloie's dad, Sean Austin, as well as her experiences with her parents and their drug misuse. At this point, it looks like Cline and Austin have gone their separate ways, but considering how often they fought on the show, that's probably for the best.

For Cline herself, getting the opportunity to join Teen Mom 2 came as a big shock. "The show had been on so long. I can't believe they would want me on a show that's been on for like 10 years with the same people," Jade admitted during an interview with Catelynn Lowell, Tyler Baltierra, and Kailyn Lowry that aired at the end of the last season of Teen Mom 2.

But despite how surprised she was to find out about her new gig, it seems like she's definitely looking forward to it — and in the meantime, she's been keeping herself busy. Cline's Instagram is filled with selfies, photos of Kloie, and pics she's taken while going out with friends — basically exactly what you'd expect from a 22-year-old mama's social media account.

Cline is currently attending cosmetology school, and on an Instagram she made strictly to share her beauty-related posts, she often shows off her talents, like this lady's locks:

"I wouldn't consider myself a replacement, but I think I have a good storyline and my story is really relatable with people," Cline recently told TMZ of her arc on Teen Mom 2. "I'm a good mom — every great mom, they make their own mistakes and what makes you a better mom is learning from your mistakes and growing with the show and becoming a better person."

Teen Mom 2 will certainly be different without Evans, but it looks like Cline's story is going to be an interesting one to follow, too, especially for fans of Young & Pregnant. For a franchise that's been going as long as this one has, it's always nice when they decide to shake things up a bit, like adding new members to the cast. And judging by her comments, it definitely seems like it will be fun to get to know Cline better.