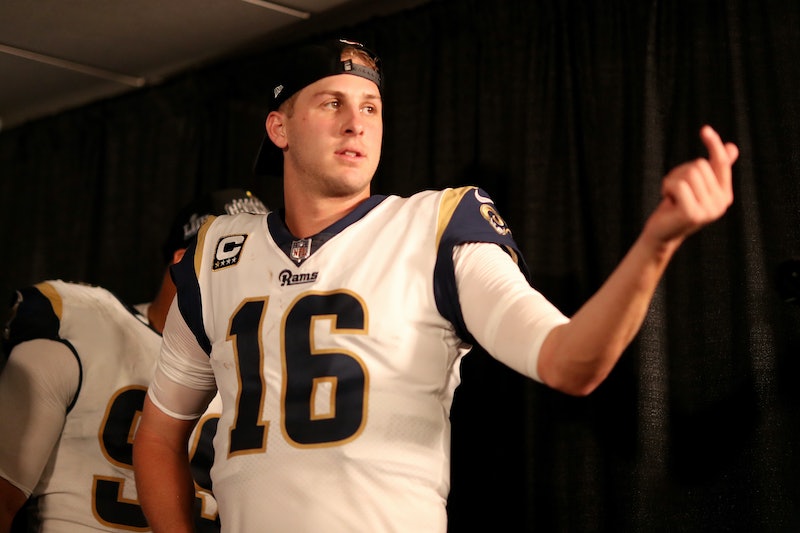 Jared Goff is a beast on the field, but his personal life is a bit more elusive. The Los Angeles Rams' quarterback may not be single, but details about his love life are pretty scarce. So, who is Jared Goff dating anyway? According to Sports Gossip and The Big Lead, the football player has been linked to model Christen Harper.

There's no evidence of a relationship on Goff and Harper's Instagram pages, though. Goff's grid is all about the game, with the occasional picture of his dog, Quincy. Harper's account, meanwhile, is pretty much all photos of her posing in various locations like Miami and New York City. Still, they do follow each other on Instagram, which could be a hint that they're together, unless they're just mutual fans of one another.

As for how long this rumored relationship has been going on, it's pretty hard to tell. Sports Gossip reported last week that Goff and Harper are an item, although it's possible they've known each other since before this month. The site didn't name its source, but it sounds like someone close to Goff may have spilled the beans. An unnamed source talked to Sports Gossip about the reported relationship, and it sounds like the quarterback is definitely trying to keep things on the down low.

"Jared is hiding her from everyone except some friends. She was at the game last weekend but sat with the Whitworth clan and not his family and friends from home," the source claimed to Sports Gossip. ("Whitworth" seems to be a reference to Goff's fellow Rams player Andrew Whitworth.)

Sports Gossip also shared a photo of Harper at a Rams game. So the source's info does seem to check out, at least on that detail. In a separate post, the site also shared a photo that appears to show Goff and Harper at a Halloween party together. So if the picture really is from October, it would mean these two have known each other for at least a few months — and they may have been dating for that long, too.

Fans who are curious to learn more about Goff's rumored girlfriend might be interested to know that Harper does more than modeling, too. She's acted in the upcoming movies Auggie and The Obituary of Tunde Johnson, Heavy pointed out. So if these two really are together, they could be well on their way to becoming a full-blown Los Angeles power couple.

Based on how private Goff seems to be, though, it might be a while before either of them comment on the dating rumors. And with the Super Bowl right around the corner, the quarterback already has a lot on his mind, without addressing any gossip. Goff will be facing off with Patriots quarterback Tom Brady at the Feb. 3 game, so he probably doesn't have much time to think about what gossip sites are saying.