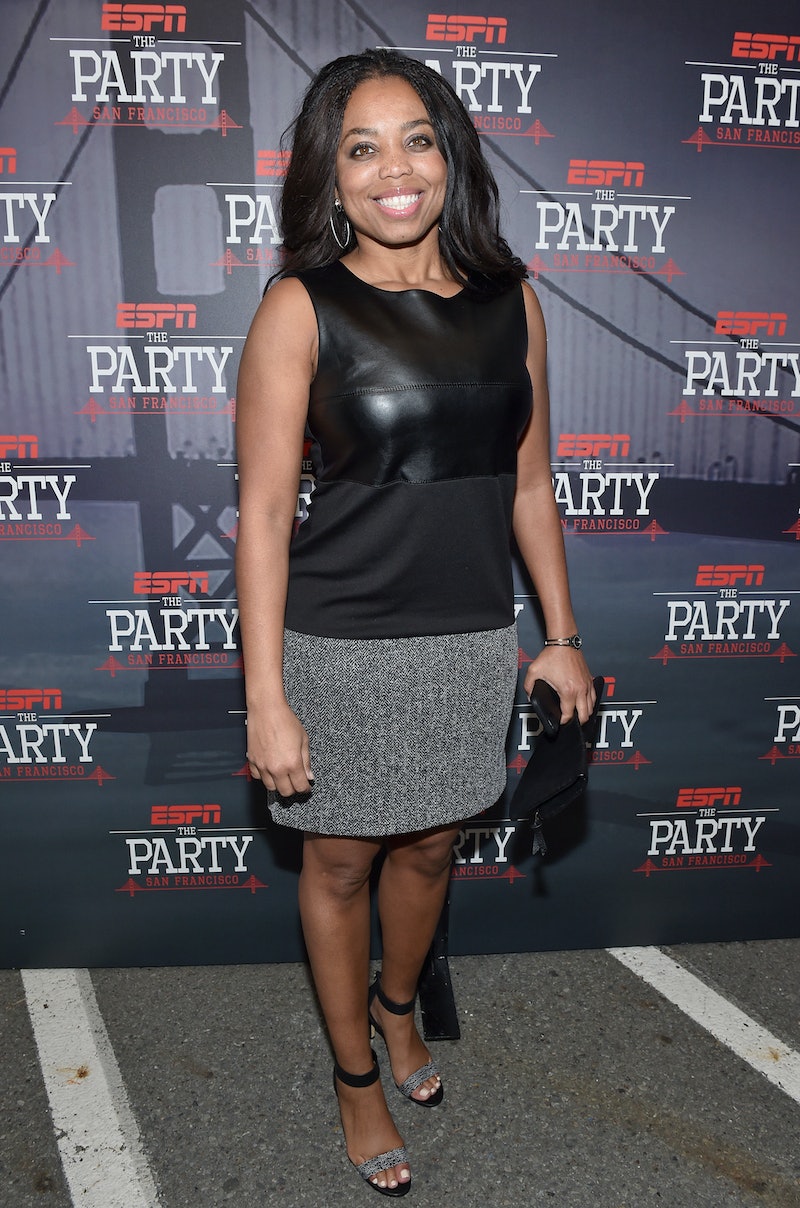 A black female sportscaster spoke out against the president this week — sparking a surprising amount of controversy, given the current approval ratings of the chief executive. Jemele Hill, the ESPN anchor who dragged Trump on Twitter, has a history of speaking her truth. Now, she's renewing the debate about influential media personalities' right to make political statements.

Hill, a 10-year veteran of ESPN, made the controversial posts on Twitter Monday. It's unclear what prompted the stream of frustration, since there wasn't necessarily a precipitating incident regarding Trump in the news that day. Whatever prompted her to post, Hill's tweetstorm did not hold back at all. She wrote:

This isn't the first time that Hill has been outspoken about political issues. Most recently, she called out the Islamophobic response to the Pulse Nightclub shooting last year. When she first started with ESPN in 2006, she was a columnist, and many of her posts focused on race issues within the sports world. She also gave an interview with the Columbia Journalism Review that year speaking to the struggles of writing about race in America:

Any time you write about race, people get incensed. I recently wrote a column saying that there is just as much evidence against Lance Armstrong as there is [against] Barry Bonds, and part of the reason there is this extraordinary benefit of the doubt extended to Lance is because he's white. That's not the overwhelming reason, mind you. Just a factor in the whole equation. I got a ton of mail about that one, even though I posed the racial element in the next-to-last graf of the column.

Hill's employers quickly posted online regarding the incident to distance themselves from Hill. "The comments on Twitter from Jemele Hill regarding the president do not represent the position of ESPN," the network's PR account tweeted. "We have addressed this with Jemele and she recognizes her actions were inappropriate."

The company issued an additional statement that expounded on its distinction between Hill's public statements and private beliefs. "Jemele has a right to her personal opinions, but not to publicly share them on a platform that implies that she was in any way speaking on behalf of ESPN," a spokesperson wrote. "She has acknowledged that her tweets crossed that line and has apologized for doing so. We accept her apology."

Hill also apologized via Twitter, not for the content itself but for how it reflected on her company. "My comments on Twitter expressed my personal beliefs," Hill said. "My regret is that my comments and the public way I made them painted ESPN in an unfair light. My respect for the company and my colleagues remains unconditional."

However, the story really caught traction when Hill's tweets were brought up at the White House press briefing on Wednesday afternoon. Washington Post White House reporter David Nakamura asked Press Secretary Sarah Sanders whether Trump himself was aware of the tweets.

"I'm not sure if he's aware," Sanders said, "but I think it's one of the more outrageous comments that anyone could make. And certainly something that I think is a fireable offense by ESPN."

The reason it may actually be a fireable offense is that ESPN issued a memo last year asking talent not to post online about politics. Since the company has previously made a statement regarding this type of behavior, it could be considered sufficient notice that Hill's comments were against company policy.

Two other ESPN reporters have recently been punished for violating the protocol. NBA anchor Sage Steele posted in January about the inconvenience of travel ban protesters; in April, she was removed from her hosting gig on NBA Countdown, but was soon after given a morning anchor position. Last year, former pitcher and baseball analyst Curt Schilling was fired for posting a transphobic photo on social media. However, since ESPN has spoken out regarding Hill multiple times sine the incident and still hasn't fired her, her job seems relatively safe.

Though Hill's comments are certainly harsh, they aren't too far off the average national sentiment in the wake of the Charlottesville protests. Accusations of Trump's white supremacy have been almost omnipresent for the past month, from Ta-Nehisi Coates to Joe Biden to Miss Texas. And while those people weren't necessarily speaking on behalf of a corporate employer, arguably neither was Hill.

More like this
Demi Lovato, Jessica Chastain & More Stars Celebrated The 4th Of July By Protesting
By Jake Viswanath
For These Abortion Clinic Volunteers, Going TikTok Viral Is A Risk Worth Taking
By Audra Heinrichs
YouTuber Runs Into Margaret Sanger’s Grandson While Filming
By Alexis Morillo
How Getting An Abortion Has Changed From The ’60s Through Today
By Amanda Chatel
Get Even More From Bustle — Sign Up For The Newsletter