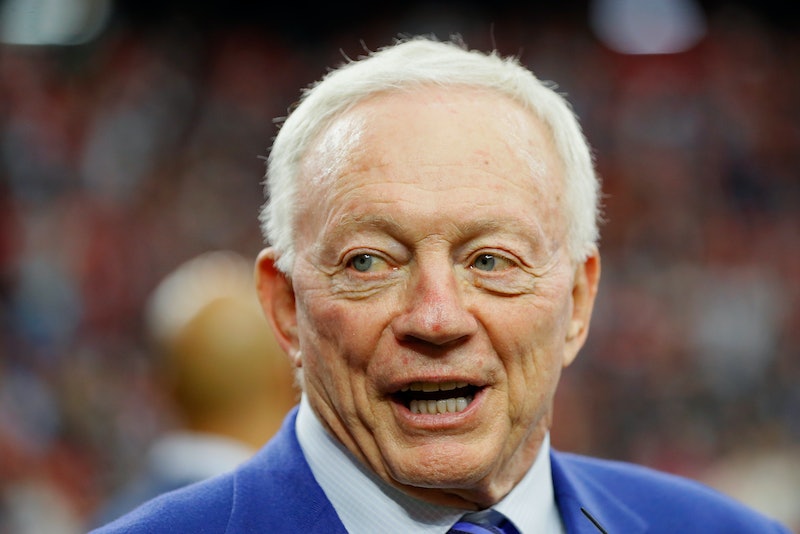 Odds are high that asking a Dallas football fan about Jerry Jones will result in a long-winded and likely glowing review of the current mastermind behind the Dallas Cowboys. But Jones' renown extends well beyond the Lone Star state, as he's widely credited for the Cowboys' inimitable branding success (long known as "America's Team," they topped Forbes' list of most valuable sports teams in 2017). As owner of the Dallas Cowboys, Jones said he'd bench players for "disrespecting" the flag — echoing Trump's remarks — in response to NFL protests during the national anthem. Jones' candid remarks are very much in line with the no-holds-barred public persona developed by the one-time college football star and oil tycoon.

Jones grew up in Arkansas, the son of a grocer with grander aspirations. The younger Jones honed his now famous knack for turning drama into profit while working as a boy with his father. Pat Jones would host talent shows in the store, and stroll around in full cowboy getup — hat, boots, and six-gun holster. As an adult man with an NFL team at his disposal, Jones used those childhood lessons, keeping the Cowboys in the news even if the stories weren't necessarily "good."

It's a fondness for media coverage shared by a particular "friend" of Jones' — President Trump, who tweeted "a big salute" to him for warning Cowboys players he'd bench them if they "disrespect our Flag."

But Jones' most recent weigh-in on the NFL protests is probably not the kind of drama the team wants. Jones himself seems to be uncertain of how to approach the standoff between players and the POTUS, a culture war battlefront that seems to many as manufactured largely by the president himself.

It began on Sept. 22, when Trump chose to bring up the NFL protests during a rally speech for Alabama senatorial candidate Luther Strange. Those protests began with former 49ers quarterback Colin Kaepernick, who started kneeling during the national anthem in 2016 as a way to protest police brutality and racial inequality in America that he, and many others, felt to be indisputable and in need of attention. Kaepernick's form of protest had come under criticism before, but it was also heading towards obscurity — Kaepernick was not signed to any team for the 2017-2018 season, and the number of NFL players taking a knee during the anthem was in the single digits.

Then Trump threw a barrel of gasoline on a dwindling flame by musing on how great it would be if they just fired the "son of a b*tch" who kneeled during the national anthem.

Perceived by many as barely-veiled racism, dozens of players also saw in Trump's comments a threat to their freedom of speech. In the games immediately following Trump's comments, over 100 professional players took a knee.

That group included Dallas Cowboys players, who came onto the field arm-in-arm and took a knee together prior to the national anthem. Notably, the players stood up for the song and the flag, ostensibly to show their act of protest was in no way meant to disrespect those symbols of America and the American military.

But that didn't stop criticism from the president from materializing in his Twitter feed, although it was tempered in comparison to Trump's usual tweet blasts. That might have been because, oh yeah, Jones was out there too, kneeling on the field with his team.

In the time since, Jones seems to have changed his mind. Speaking after the Cowboys' loss to the Green Bay Packers on Sunday, Jones said, "If there is anything disrespecting the flag, then we will not play." Jones noted that the NFL protests were about complicated issues, then clarified:

But let me be real, real clear: The thing that the National Football League needs to do and the Dallas Cowboys are going to do is stand for the flag. We're going to do that. It's the rules that are on the book in my opinion.

Jones is perhaps the most influential NFL team owner in the nation, and his opinion on this debate is crucial. So big is Jones' sway that Trump reportedly called him up to try and persuade him to the president's side.

That's quite an achievement for the son of an Arkansas grocer. Jones' parlayed early success in drilling for oil into an NFL investment whose financial return is difficult to imagine anyone ever replicating. But it remains to be seen if he can strike a winning balance between respecting his players and ameliorating the angst in those who see kneeling during the anthem as indisputably unpatriotic.