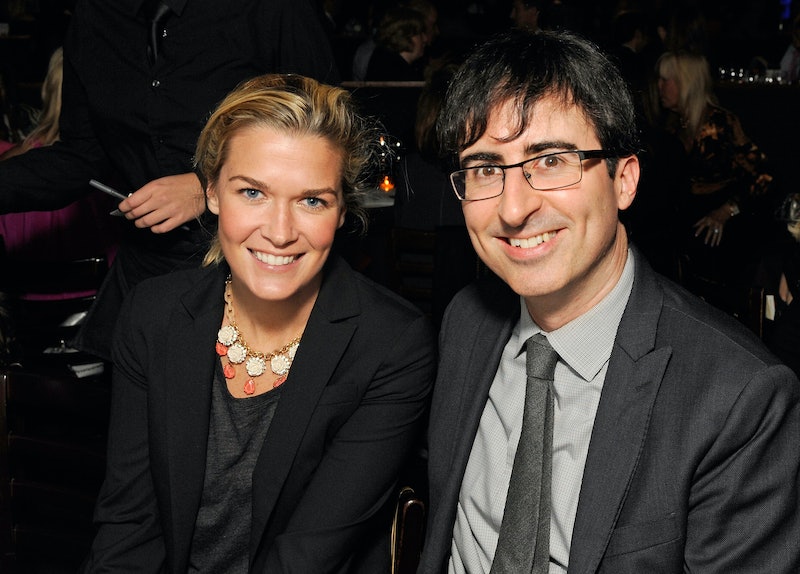 He's the funny guy who makes the news understandable, and he's also one half of an inspiring power couple. While you're probably less familiar with John Oliver's wife Kate Norley, she has a pretty fascinating background, much of it rooted in her experience serving overseas in the Iraq War. What might look like a mismatched pairing of ideals — who knew that Oliver the liberal Briton would find love with a Republican American — actually makes perfect sense when you consider how the two met and how their POVs have shaped their marriage.

According to a Stars and Stripes profile, Norley comes from an affluent family but never saw herself above the fray. After attending Episcopal High School boarding school in Arlington, Virginia, Norley enlisted in the Army, a decision that was made in the advent of the 9/11 attacks. She served in Iraq as a U.S. Army combat medic in Fallujah and Ramadi and as a mental health specialist in the field, counseling soldiers on returning back to conflict.

A determined soldier, Norley believed in her mission overseas. "If they told me tomorrow I could go home ... I wouldn't be satisfied I’m finished with what I set out to do,” she told Stars and Stripes while serving in 2004. She would often share her stories with the media, such as The Washingtonian, which detailed a touching reunion between Norley and an Iraqi woman at the White House. Norley has also appeared on Fox News to campaign for more funding for American troops. She now works as a veterans' rights advocate.

So, how exactly did Oliver and Norley cross paths then? Of all places, Oliver and Norley met at the 2008 Republican Convention in St. Paul, Minnesota. Oliver was there working as part of his Daily Show job when, according to The Boston Globe, Norley and Vets for Freedom members helped hide Oliver and his crew from security. Initially friends, they dated for two years before becoming engaged in St. Thomas in July 2010. The year after, the couple got married.

Oliver describes Norley as "very American with a capital A," and her views on what it means to be American have apparently transformed the way he looks at the country. "I'm a little more defensive of how America is perceived overseas," he tells the Globe. "America takes a lot of [expletive], much of it well earned, from the rest of the world. And yet when something terrible goes down, people are waiting for Americans to fall out of the sky and help them."

The comedian obviously admires his wife, and it's easy to see why. Shortly after becoming engaged, Oliver spoke highly of Norley in the most perfectly Oliver-esque way, telling People magazine, "It's the most emasculating thing I could possibly do to go out with someone who has actually done something valuable with their life."