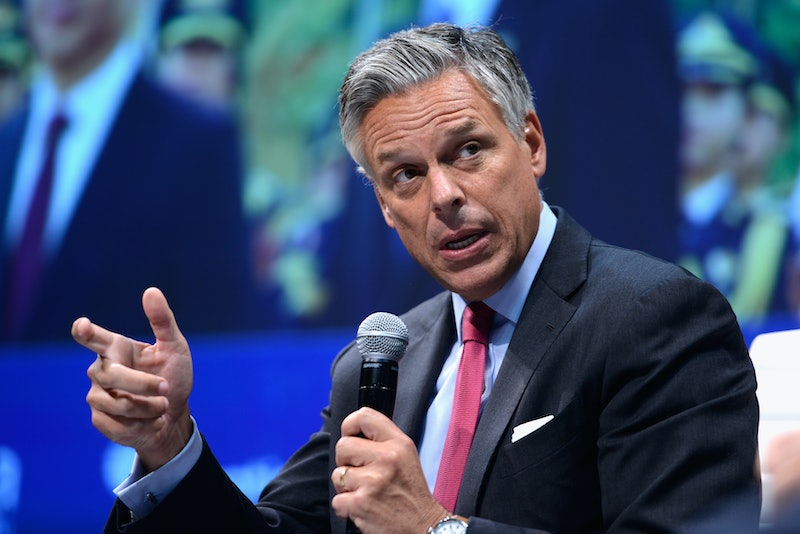 Given the Trump administration's continuously evolving narrative around Russia, it's probably safe to say a great deal of thought went into the person filling the role of U.S. ambassador to Russia. President Trump has reportedly tapped Jon Huntsman for the Russia ambassador position, with the decision coming after a week of scandal surrounding Russia's own ambassador to the United States. So who is Huntsman, the man trusted with the position that could surely take on a new life within the Trump administration?

Unlike some of Trump's questionable choices for positions within his administration, the former Republican governor of Utah appears to have the resume needed for the job. Huntsman served as the U.S. ambassador to Singapore under President George W. Bush, and then later in the same role to China under President Obama. He also unsuccessfully ran for the Republican presidential nomination in 2012.

Though his family's company has holdings in Russia, Huntsman himself has no special expertise in Russian affairs, instead spending decades cultivating a relationship with the Chinese (including learning fluent Mandarin). But the New York Times reports that his former position in China could be particularly helpful in his work with Moscow, as both countries require skill with authoritarian governments that have had complex relationships with the United States.

While Huntsman differs in terms of his resume, he is similar to several members of Trump's staff in that he was initially reluctant to throw his support behind the president as a candidate. He eventually backed Trump after he became the Republican nominee, but rescinded his support following the release of the now-infamous Access Hollywood tapes.

"The campaign cycle has been nothing but a race to the bottom,” Huntsman said at the time, calling for then-Governor Mike Pence to replace Trump at the top of the ticket.

Huntsman was also once the target of Trump's tweets. While serving as ambassador to China, Trump went after him in a series of Twitter rants, calling him a "lightweight" and "weak." Trump likewise claimed that China "did a major number on us" during Huntsman's time as ambassador.

But the pair reportedly buried the hatchet during the administration's transition. So much so, of course, that Trump selected Huntsman for the position. While it wouldn't be the most unusual pairing in the White House (that honor perhaps goes to Steve Bannon, Reince Priebus, and their bromance), it will perhaps be one of the most-watched.