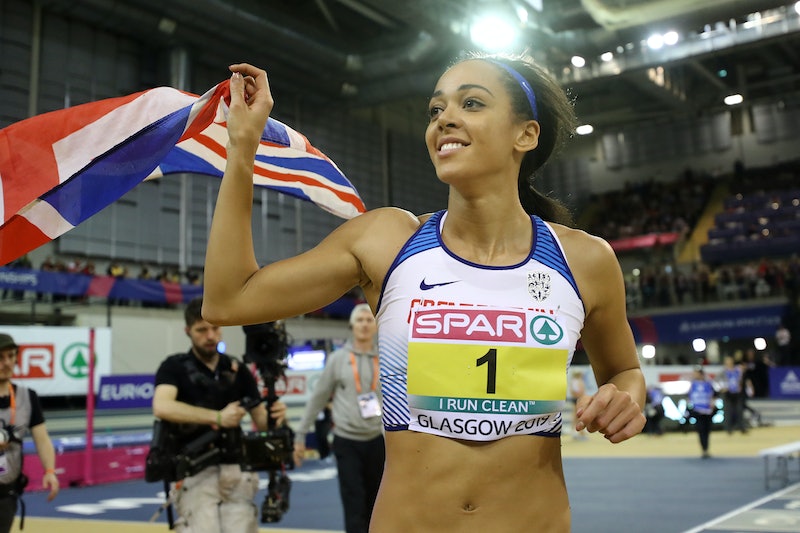 The Great Stand Up to Cancer Bake Off sees a group of celebrities take part in an extra special episode of The Great British Bakeoff in, you guessed it, the name of Stand Up To Cancer. The show will feature everyone from comedians Russell Brand and Johnny Vegas, to Love Island presenter Caroline Flack and Made In Chelsea's Georgia 'Toff' Toffolo. There will also be a few sports people taking part, including boxer Nicola Adams, Paralympic wheelchair racer Hannah Cockroft, and Olympic heptathlete Katarina Johnson-Thompson. But who is Katarina Johnson-Thompson, and where might you know her from?

Katarina Johnson-Thompson is first and foremost an Olympic heptathlete, who has competed for team GB on multiple occasions, including at the 2012 Olympics in London. Some of her most notable wins include her heptathlon gold at the World Youth Championships in Brixen in 2009 and long jump gold at the World Junior Championships in Barcelona in 2012.

She has also won heptathlon gold at the 2018 Commonwealth Games in Australia, and heptathlon silver medal at the European Championships in Berlin. Impressively, Johnson-Thompson also set a new British high jump record of 1.98m at the 2016 Olympics in Rio, despite only coming sixth at that event. Impressive.

Perhaps, like me, you might be feeling a little confused about what a heptathlon actually is and what a heptathlete actually does. DW, after a spot of research, I'm all clued up and I've got you covered.

The International Association of Athletics Federations describes a heptathlon as "a seven-event contest covering the whole range of athletics disciplines and spread over two days." The first day sees competitors taking on the 100m hurdles, high jump, shot put and 200m. Next, they compete in the long jump, javelin and 800m on day two. You may associate Jessica Ennis-Hill with the heptathlon, and you would be right to do so. She won both a gold Olympic medal and silver Olympic medal for the event at London 2012 and Rio 2016, respectively.

Anyways, back to Katarina Johnson-Thompson. The sportswoman, who hails from Liverpool, is 26 years old and, like lots of people her age, is a lover of Instagram. Sharing pictures of her training, holidays, and two amazingly cute sausage dogs, Johnson-Thompson has built up a following both within the world of sports and out of it.

Indeed, in 2017, Vogue interviewed the young star, proving her influence and appeal goes far beyond the world of sport. Speaking to Susie Rushton, Johnson-Thompson revealed she "really enjoy[s] shoots, getting my make-up done and getting tips for my own make-up bag." My kinda gal!

Basically, she's cool AF, and I can't wait to see how she does on The Great Stand Up to Cancer Bake Off.

The show will be judged by Paul Hollywood and Prue Leith as usual, and Noel Fielding and Sandi Toksvig will also be returning for hosting duties. Yussss.

Impressively, the mini series will span across five different episodes, each featuring different celebrities taking on a number of baking tasks. Personally, I can't wait to see Rylan's showstopper, Jeremy Paxman decorating his biscuits, and Toff taking on intricate pastries. Bring it on.