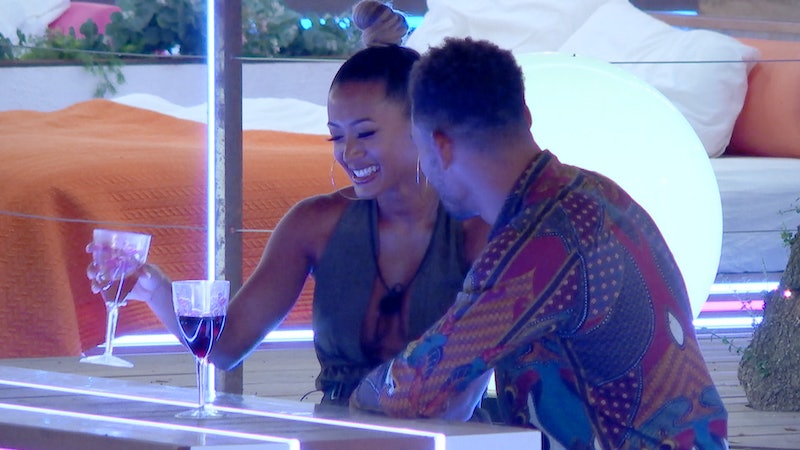 The Love Island villa welcomed a lot of new Islanders during Monday night's recoupling, but the last of these new contestants came in the form of Kazimir Crossley. Kazimir was one of six new girls to join the male Islanders at Casa Amor during last week's episodes, impressing Josh Denzel so much that he chose to recouple with Kaz, thus devastating his former partner, Georgia Steel. While Josh and Georgia have exchanged many words about his dramatic decision, Kaz didn't get much of a word in edgeways until Wednesday's episode, when she and Georgia shared a chat. So, who is new Islander Kazimir Crossley? Who are her celebrity connections? And, will she ever make peace with Georgia?

Kazimir, or Kaz as she is referred to by her fellow Love Island contestants, is a 23-year-old makeup artist based in London. According to The Sun, Kaz had been single for eight months before joining Love Island. And, while she may not have any romantic history with any former Islanders, she does know a few of last year's contestants.

In October last year, Kaz did the makeup for Love Island 2017 contestants' Kem Cetinay and Chris Hughes' music video for "Little Bit Leave It." In fact, Kaz actually posted several pictures of her hanging out with both Kem and Chris on her Instagram page, alongside the caption: "BTS from 'Little Bit Leave It'. Chris and Kem music video. Such a fun a day!"

"Little Bit Leave It" isn't the only celeb music video on which Kaz has worked, as her Instagram page also reveals she acted as the head makeup artist on Zayn Malik's "Still Got Time" music video. "Thank you @stefanomosesmusic for the amazing opportunity to be Head make up artist for the cast of @zayn malik - STILL GOT TIME video," she captioned a post. And that's not all.

Indeed, Kaz has also worked on make-up for at least three Stormzy music videos, which, yeah, is pretty impressive. "And thats a wrap," she captioned a snap from June last year. "My 3rd video with Stormzy and my favourite song off the album."

On BBC Radio One last week, DJ Maya Jama — who is also Stormzy's girlfriend — revealed she knows Kaz too, adding that she has done her makeup a couple of times. And, everyone knows Stormzy and Jama are huge Love Island fans, as the BRIT-award winning grime artist made a surprise cameo appearance during last's year series.

So, what else is there to know about Kaz?

Well, in case it isn't obvious, Kaz appears to have got Josh completely infatuated with her during her short time on the show. Speaking on Wednesday night's episode, Josh shared with viewers via the Beach Hut his belief that Kaz is "the entire package". He said: “I feel like a kid in a candy shop when I’m around her. I’m so excited and I haven’t had that in a long time. She is the entire package, right here, right now.”

So, should fans get used to Kaz sticking around the Love Island villa for a long time to come?

Indeed, despite Josh's interest in her, Kaz's time in the villa could still be cut short, as Josh is receiving a lot of backlash from Love Island viewers over his treatment of Georgia, which means the couple could be in jeopardy in the forthcoming dumping ceremony.

Despite Kaz's friction with Georgia, the pair did have a chat during Wednesday night's episode, so could peace be brewing? Well, following the pair's chat, Kaz said in the Beach Hut: "Obviously she had a lot of feelings for him, which is why I respected Georgia. I felt like this chat was needed at this time."

Nonetheless, Kaz also told Josh that Georgia was "a bit patronising" during the chat, so maybe don't raise those white flags just yet, Love Island fans.