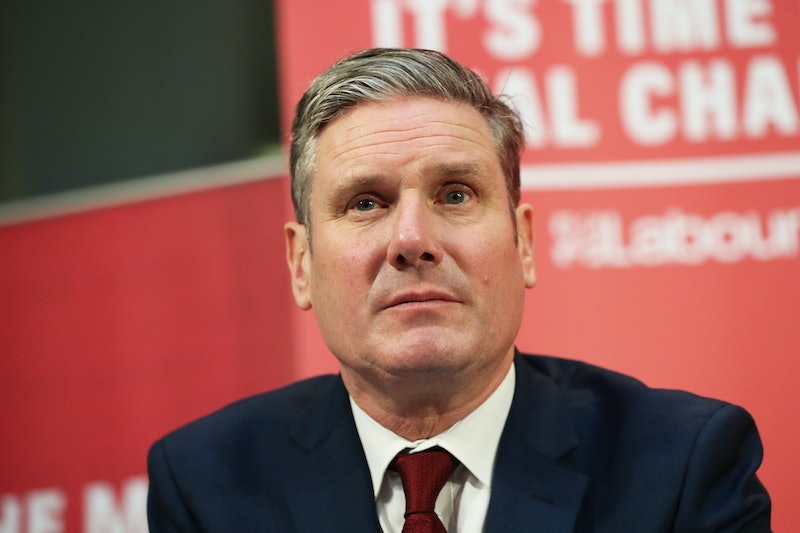 Jeremy Corbyn is set to resign as Labour leader next week, and there are already signs of who is most likely to succeed him. The election process starts next week, and the party will see a new leader take over sometime in March, as HuffPost reports. Thanks to a recent YouGov poll of Labour members, it seems that Keir Starmer is currently the frontrunner, followed by Rebecca Long-Bailey and Jess Phillips. But you may be wondering, who is Keir Starmer?

Starmer was raised in Southwark by his “Guardian-reading, Labour-leaning parents,” as he referred to them in an interview with The Guardian, and he was named after Labour’s first MP Keir Hardie. After attending Reigate grammar school, he went on to study at law and postgraduate law at the University of Leeds and Oxford, earning two degrees in law and civil law.

“I had the idea of changing things for the better,” he told The Guardian in 2008. “I thought I’d become a solicitor but then the idea of actually presenting an argument, being the person who got up in court, began to appeal.”

A year after his graduation from Oxford in 1986, Starmer became a barrister and practised at Doughty Street Chambers, which he co-founded in 1990. Here, he specialised in human rights issues, international law, judicial review, and criminal law, according to a bio by the University of Oxford. He has undertaken several high court cases, including a case filed by McDonald’s against two environmental activists, where he represented the latter. Known as the McLibel case, it eventually became the “longest case in English history,” as BBC News reported at the time.

After being appointed Queen’s Counsel in 2002, Starmer became “the human rights advisor to the Policing Board in Northern Ireland,” where he ensured that the “Police Service or Northern Ireland fully complied” with the Human Rights Act 1998, as a bio by Doughty Street reads. Starmer was also given the role of director of public prosecutions and head of the Crown Prosecution Service between 2008 and 2013.

As the University of Oxford writes, he introduced several policies “to ensure that all prosecutors provide a high quality service to the public.” He also served as the director of revenue and customs prosecutions, where divisions covering fraud, organised crime, and counter-terrorism reported to Starmer.

Becoming Labour MP for Holborn and St. Pancras in 2015, Starmer first held the role of shadow minister for the Home Office before being given his current role as shadow Brexit secretary. As iNews writes, the MP has “positioned himself as someone who could heal the division that have grown in Labour over the past four years,” stating that the “party needs to find a compromise.”

The possibility of succeeding Corbyn isn’t lost on Starmer, and he has made it clear that if he were to become Labour leader, his decisions won’t be influenced by his predecessors'. “I’ve said this before — I don’t need somebody else’s name tattooed on my head, some past leader, in order to identify and make decisions,” he told the Today programme (via iNews).