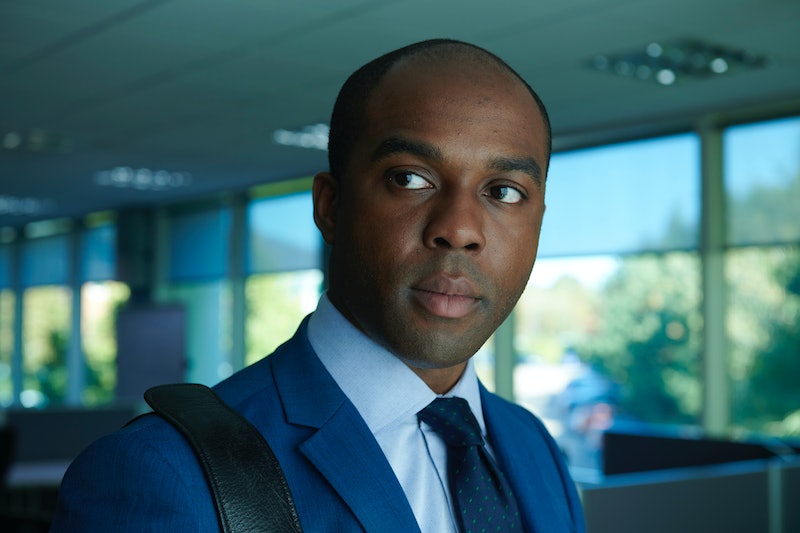 Doctor Foster may not be returning for a while yet, but its creator Mike Bartlett has been busy with a new project, which debuts tonight (Dec. 16) on ITV. Shining a light on workplace bullying, Sticks & Stones features a cast of familiar faces like Ben Miller and Susannah Fielding, but it also features a relatively new actor as its lead. You'll have briefly seen him in the first series of Killing Eve, but who is Ken Nwosu and what other projects has the actor worked on?

Having graduated with a BA (Hons) in acting at the Drama Centre London in 2013, Nwosu has starred in dozens of plays and stage performances. Earning the Best Male Performance at the Off West End Awards 2018 for his role in An Octoroon, Nwosu has become a well-respected actor within the theatre circuit. It was only a matter of time before he translated his talent over to screen, which he did in Disney's Christopher Robin last year.

During this time he also starred in the fourth series of Catastrophe, Upstart Crow, and the first series of Killing Eve. While these three roles were minor, tonight (Dec. 16) Nwosu will be in his first leading role on the small screen for ITV's Sticks & Stones. The three-part series, written by Doctor Foster's Mike Bartlett, follows businessman Thomas Benson (played by Nwosu) who freezes during an important pitch. This event leads him down "a spiral of desperately trying to win back lost clientele while becoming increasingly paranoid," as Radio Times writes.

Despite Nwosu's experience, landing the lead on Sticks & Stones made him feel quite apprehensive. "I bought a book on screen acting. I read that book, I listened to the audiobook of the book! I thought I had a lot of catching up to do and I did," he told Virgin Media. "When I got to set, I was doing things I'd never experienced. It is hard work. It's [definitely] different to stage acting and I had to learn really fast!"

Thankfully, there were a lot of rehearsals for Nwosu to get into the swing of things, which is something he's used to from his theatre work. "To have this opportunity to rehearse the scripts and really delve into it was fantastic," he told ITV. "Luckily, Mike Bartlett has obviously written so much for theatre it was invaluable to have him in the room, to use him as a sound board, to bounce off him and Julia [Ford] to bring my own thoughts into it and, of course, the other members of the cast." The actor continued:

"It was a completely invaluable experience, which also allowed us all to be on a similar page as we progressed in terms of telling this story."

Sticks & Stones begins tonight (Dec. 16) on ITV at 9 p.m., and will continue over three nights.