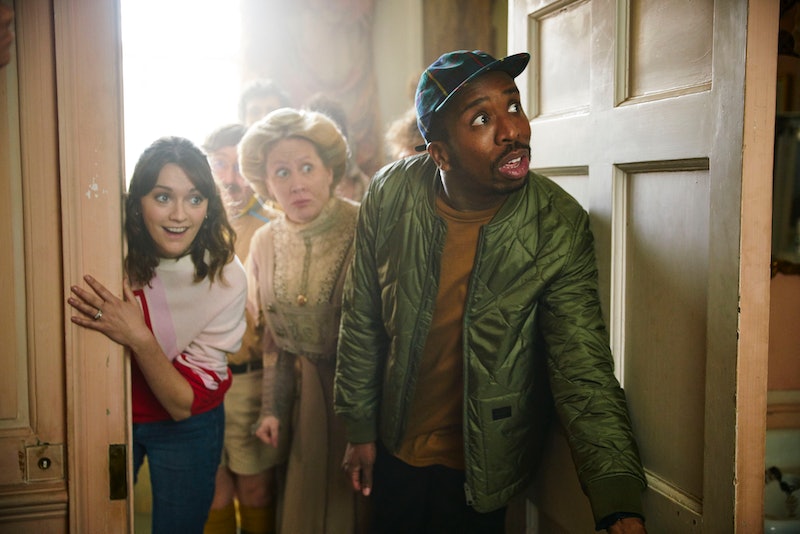 If you're feeling sad because Horrible Histories is coming to an end, I might just have the perfect antidote for you. BBC One is launching a new comedy series, Ghosts, which just happens to feature all your favourite Horrible Histories regulars. The show starts Monday, April 15 and the cast is led by Fresh Meat star Charlotte Richie and newcomer Kiell Smith-Bynoe who play couple Alison and Mike. But who is Kiell Smith-Bynoe and where do you recognise him from?

Smith-Bynoe is a London-based comedy actor and I'm anticipating pretty big things for him. He's not entirely new to the BBC family, having starred in two BBC Three comedies before — Enterprice and The Tash and Ellie Show. He's also a familiar face on Channel 4, having appeared in four shows, as well as featuring regularly in Britain Today, Tonight and Stath Lets Flats. Tom Kinglsey, the director of Stath Lets Flats, also worked on Ghosts so they're definitely keeping things in the comedy family.

Smith-Bynoe is a pretty big name on the online comedy scene, having starred in a number of viral videos, so I wouldn't be surprised if you recognise his face from those. My favourite comedy film he's starred in is One Direction's parody short That Moment. In the skit Smith-Bynoe plays Rochelle, a "perfume visualisation expert," and he's quite frankly hilarious. If you haven't seen it yet, you must, it'll probably make you laugh until you cry. And it's a great excuse to reminisce about the good old 1D days. Smith-Bynoe's Instagram is pretty cool too with plenty of snaps giving us an insight into his personal life and, of course, a lot of comedy videos to keep you chuckling while you scroll through his feed. Definitely worth a cheeky follow, I'd say.

In Ghosts Smith-Boyce's character Mike and his partner Alison are struggling to get onto the property ladder, until one day they discover that they have inherited a house but not any old a house, a huge mansion. However, not everything is as it seems because the house is haunted by the ghosts of its former inhabitants.

Laurence Rickard, who also stars in Horrible Histories, and plays the ghost of a caveman in Ghosts, said "all of those house-share sitcoms contain people that are in a situation they are stuck in. Ghosts is the ultimate version of that, they are stuck together for hundreds of years and none of them can leave.” The house is so big that the couple decides to turn it into a hotel much to the ghosts' dismay. Their haunted housemates set about trying to persuade them to change their minds through some good old-fashioned haunting. The ghostly characters range from everything from a 17th century woman to a disgraced politician from the '90s and if the trailer is anything to go by it's going to be pretty great. A spooky comedy, I'm all in. And I'll definitely be keeping tabs on Smith-Bynoe, it looks like he has everything it takes to have a stellar career and I'm excited to see what he does next.