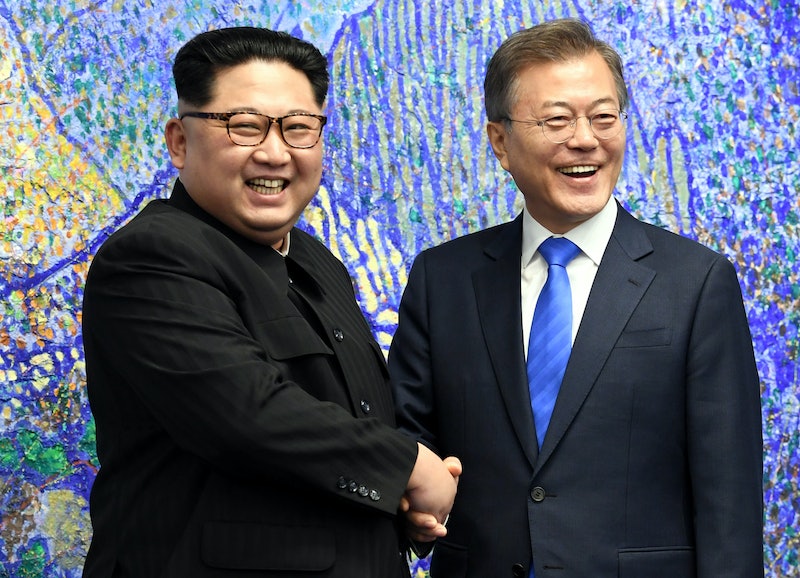 Considering that the North Korean government tends to keep its affairs under wraps, it's no surprise that details about its leader's personal life, like who his family members are, are also often shrouded in mystery. Yet in spite of the secrecy, reports about who Kim Jong Un's mother is are peppered all over the internet. In 2016, The Washington Post identified Kim's late mother as Ko Yong Hui. Ko, who was half Japanese, died in 2004, according to the publication.

In May 2018, The New York Times reported on former senior North Korean diplomat Thae Yong Ho's book about Kim's family. Thae wrote about Kim's feelings toward his mother, and how his grandfather and former North Korea leader, Kim Il Sung, did not accept Ko, whose half Japanese heritage was reportedly frowned upon. In that write-up, the newspaper noted that details about the North Korean leader's mother were "a tightly guarded secret in the country."

However, Ko's sister, who is a North Korean defector, has spoken to the news media about Kim's mother. In 2016, Ko Yong Suk told The Washington Post about the relationship between the two. "He wasn’t a troublemaker, but he was short-tempered and had a lack of tolerance," she told The Post. And how that "short temper" played out paints an intriguing portrait about the North Korean leader.

"When his mother tried to tell him off for playing with these things too much and not studying enough," Ko told the publication, "he wouldn’t talk back, but he would protest in other ways, like going on a hunger strike."

NK News, a website that covers North Korean affairs, reported that Ko was a dancer and actress in the Mansudae group, and began dating Kim's father, Kim Jong Il, in the 1970s.

Just like The New York Times noted, NK News also reported that Ko's half Japanese heritage made her unfavorable, according to "the revolutionary ideals espoused by the state." According to Thae, Kim was critical of his uncle, Jang Song Thaek, for supposedly souring the relationship between his grandfather and mother. Jang was executed for "treason" in 2016, according to the New York Times.

With President Donald Trump and Kim set to meet in Hanoi, Vietnam, for their second summit in late February, there might be some curiosity about the North Korean leader's background. Books like Thae’s, titled Cryptography From the Third-Floor Secretariat, can give people a chance to learn more about Kim’s family.

If you are interested in finding out what Ko looked like, The Korea Times published photos of her when she reportedly visited Japan in 1973. The pictures were originally published in the Japanese newspaper, The Mainichi, which stated that the images were "valuable materials" and "extremely rare."

In a detail that perhaps best explains why Ko rarely ever made it on the news, The Korea Times reported, "North Korea has not given much publicity about Ko because of her career as a dancer career and family background linked to Japan."