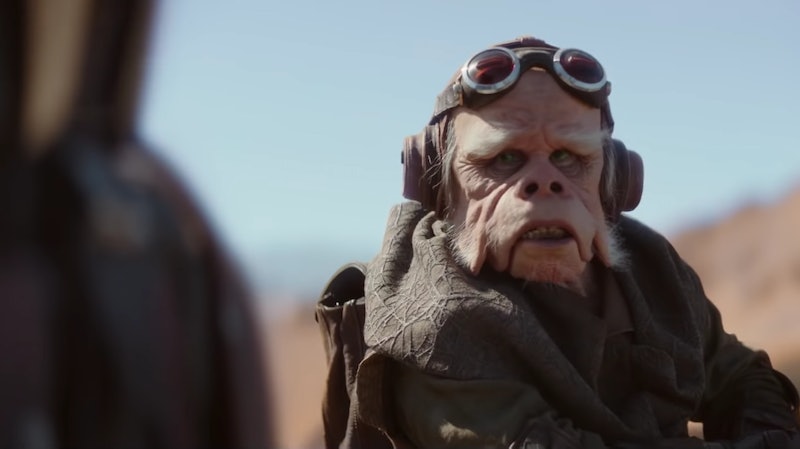 One of the most fun things about Star Wars are all of the bizarre species that turn up in any given galaxy. The new Disney+ show is no exception, with the characters ranging from human to droid to an Ugnaught named Kuiil on The Mandalorian. The latter is voiced by Nick Nolte, per io9, and is depicted riding a bizarre-looking creature called a blurrg in the trailer.

"Blurrgs are these big, bi-pedal, huge, piranha-like pack animals that were stop-motion in Caravan of Courage and I think Battle [for] Endor," showrunner Jon Favreau told MTV News, referring to two Star Wars TV movies. "And they only appeared there, and they were the most awkward-looking creatures, and we decided, 'That's gotta be in our show.' So we have an Ugnaught riding a blurrg — you will see that on The Mandalorian."

Ugnaughts, on the other hand, are described on the official Star Wars site as "a species of diminutive humanoids who divided themselves into a tribal hierarchy. They have pink skin, white hair, upturned noses, and thick layers of jowls." The article goes on to explain that Ugnaughts "found work across the galaxy everywhere from the Jedi Temple and Coruscant to Cloud City and Lothal."

Indeed, these funny-looking creatures were first introduced as Cloud City workers in Episode V: The Empire Strikes Back, per the below video from Star Wars Explained. Ugnaughts are from the planet Gentes, according to Wookiepedia, but many of them were enslaved across the galaxy. As a result, three different Ugnaught groups were offered their freedom if they helped build the floating metropolis of Cloud City, per the site. As a result, many of these aliens settled there, in addition to places like Coruscant.

Other than Episode V, Ugnaughts have appeared in animated shows like The Clone Wars, Star Wars Rebels, and Star Wars Resistance, per Wookiepedia, in addition to several comic books. Still, they're a relatively unknown race, which will allow The Mandalorian to fill in the blanks for this new character of Kuiil.

And while there's not much information on Kuiil himself, audiences know that he's played by Nolte, who's known for movies like Affliction and 48 Hrs. As a result, the character sports a gravely voice indicative of the actor. "I have never met a Mandalorian," Kuiil growls in a show teaser. "I've only read the stories."

Fortunately, Star Wars diehards will only have to wait until Tuesday, Nov. 12 to watch The Mandalorian for themselves to learn more about Kuiil and perhaps even meet more Ugnaughts.

More like this
Rupert Grint Just Shared A *Major* Update About Ron Weasley’s Future
By El Hunt
Pamela Anderson’s Dating & Marriage History Could Be Its Own TV Series
By Jake Viswanath
Who Is Allison Williams Dating After Her Divorce? She’s Engaged With A Child
By Jake Viswanath
Everything To Know About 'RHONY' Season 14
By Jake Viswanath, Alyssa Lapid and Brad Witter
Get Even More From Bustle — Sign Up For The Newsletter
From hair trends to relationship advice, our daily newsletter has everything you need to sound like a person who’s on TikTok, even if you aren’t.