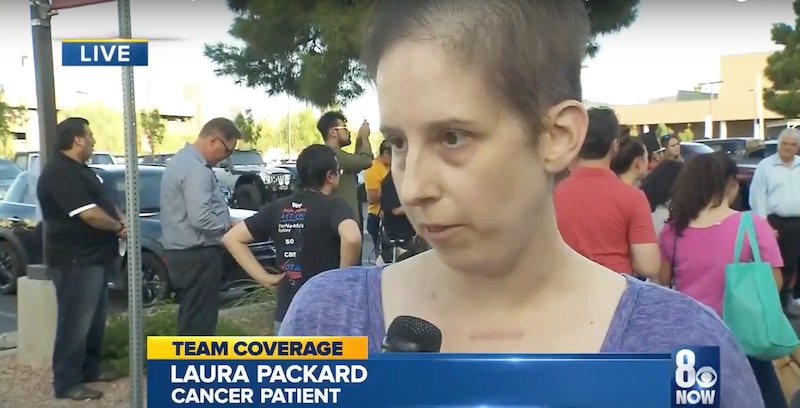 Health care is an emotional issue for many people. For people who are worried about whether their health care will be affected by the Graham-Cassidy bill currently being discussed in Congress, it isn't surprising that it can get especially worrisome. It's also likely an emotional subject for elected Republicans, who failed the first time around to repeal the Affordable Care Act, and have just over a week to muster together the votes on their last-ditch plan before the legislative tools they're using expire. One of those Republicans is President Trump, who blocked a woman with cancer on Twitter after she shared her concerns about the repeal effort.

Laura Packard, a Democratic political strategist from Enterprise, Nevada, has Stage 4 Hodgkin's Lymphoma, meaning that the disease has spread beyond her immune system to her organs. According to Packard, she's gotten a significant portion of her care for the deadly disease through the Affordable Care Act (aka Obamacare). In the midst of the repeal effort back in May, she tweeted about beginning chemo, and how she was only able to pay for her treatment through the ACA. If it was repealed, she didn't know what she'd do.

Packard's tweet went viral amid the fight over various "repeal and replace" bills. Over 10,000 people have retweeted Packard's May 3 tweet.

Somewhere along the line, the president of the United States, a man who literally has been handed the most powerful prize in the entire world, had apparently had enough of seeing her viral tweet reminding him of potential victims of his actions. To Packard's surprise, she found that Trump blocked her.

Packard is far from the first person that Trump has blocked on social media. There is actually a full-scale class action lawsuit against the president by people who have been blocked by him on Twitter, arguing that since Twitter is a public forum, being blocked keeps them from accessing vital information about the country.

But rather than treating being blocked on Twitter as a reason to quiet down about her plight, Packard renewed her efforts to speak up about how the ACA has helped her and why she's trying to stop it from being repealed. "I try to keep him informed with facts every few days or so. Maybe he doesn't like facts," Packard tweeted of her Twitter interaction with the leader of the free world.

In the months since she started chemo back in May, the treatment and the cancer have taken a toll on her body. She recorded a video for NowThis that highlighted how much Obamacare has helped her, and worried about what would happen to people with pre-existing conditions under the Graham-Cassidy health care plan.

She also blasted her own Republican senator, Dean Heller, who at one point promised to not vote for a health care bill Nevada's governor, Brian Sandoval, didn't support, but is now doing just that, as a sponsor for the Graham-Cassidy bill.

Proponents of the Graham-Cassidy bill have claimed that it will protect patients with pre-existing conditions, but the bill's text clearly allows states to seek waivers that eliminate the regulations forbidding insurers from charging more for sicker patients. The bill even allows the states to waive rules that stop insurers from increasing prices on enrollees once they get sick, even if they're already covered.

Packard's story is part of a ramping up defense of the Affordable Care Act by those who celebrate it. Earlier in the summer, mobilized activists fought hard to keep Obamacare and won. But with this new Cassidy-Graham bill rising in prominence quickly, they've had less time to fire up the opposition. But for Packard, someone who depends on the ACA to survive, fighting this bill is an immediate concern.