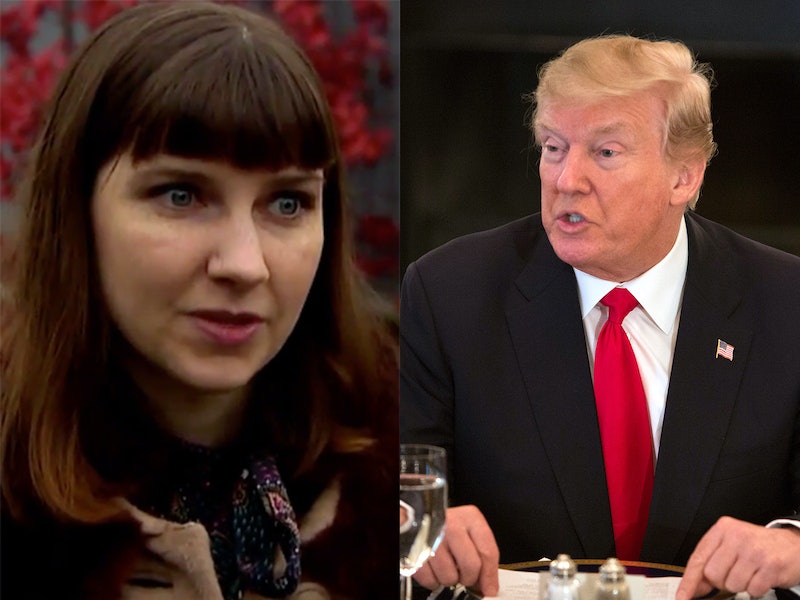 Leah Griffin, a teacher, librarian, and survivor of sexual assault, is patiently waiting in the Seattle-Tacoma International Airport. After a daunting trip through security, she's preparing to board a flight for Washington, D.C., as Senator Patty Murray's guest for the State of the Union address. Griffin isn't overwhelmed, or uneasy, or even a little nervous. Instead, she's determined to get a bill that would offer resources to fellow survivors passed — even if that means sitting in a room with the president of the United States, a man who's denied accusations of sexual assault or misconduct from at least 19 women.

"It's going to be challenging," Griffin tells Bustle via phone when asked how she thinks being in President Trump's presence will affect her. "I think that while it'll be uncomfortable for me, it'll be made better knowing that the purpose of it is to bring awareness to the Survivor's Access to Supportive Care Act and to make sure that we can make a world where survivors have access to the evidence collection that they need in order to get justice and in order to prosecute predators."

Murray, a Democrat from Washington, is one of nine senators bringing sexual assault survivors and advocates as their guests to Trump's first State of the Union, according to CNN. Inspired by the #MeToo movement, representatives of both the House and the Senate invited these individuals as part of an ongoing attempt to bring the insidious issue of systemic sexual violence against women to light. While the #MeToo movement has made exceptional strides in bringing sexual abuse to the forefront of cultural conversation, it's not lost on many survivors, advocates, and Democratic politicians that Trump is one of many powerful men who have been accused of sexual misconduct — or worse — but has yet to suffer any substantial consequences. It certainly isn't lost on Griffin.

Still, the #MeToo movement continues to provide the foundation for change, and that foundation is one on which Griffin is honored and excited to build. That work includes multiple attempts at passing the Survivors' Access to Supportive Care Act, a bill dedicated to providing survivors of sexual assault with the necessary tools and support to bring their abusers to justice. For Griffin, the work of passing the bill, a piece of legislation she's been working with Murray to sign into law for years, is deeply personal. After Griffin was sexually assaulted, she went to the closest emergency room and was turned away because she was told "they don't do rape kits." Sadly, many survivors across the country experience the same treatment.

Griffin notes that only 17 percent of Tier One and Tier Two hospitals have full access to rape kits, according to the International Association of Forensic Nurses — and that number is just an estimate. The bill would conduct a nationwide survey to determine exactly how many hospitals provide the care survivors need, and how many would require assistance to make that care available in the future. "Right now, if you're raped the only way to know if the hospital closest to you provides rape kits is to call them yourself, ahead of time," Griffin tells Bustle. "There's no other way to get that information. So we want to make that information easily accessible and available to the public."

The bill will also fight the devastating national shortage of Sexual Assault Nurse Examiners (SANE). Mary Kay Clunies-Ross, vice president of membership and communications for the Washington State Hospital Association, told Modern Healthcare in 2015 that, "only about 10 percent of hospitals in the U.S. have a forensic nurse examiner on staff, and even fewer have one available around the clock." Unfortunately, the shortage of qualified SANE nurses is exacerbated by the high turnover rate in a field that's notorious for burnout. In 2014, a survey published in Policy, Politics & Nursing Practice found that 17.5 percent of new nurses leave their first job within one year of starting, and one in three (33.5 percent) leave their job within two years.

"I think that while it'll be uncomfortable for me, it'll be made better knowing that the purpose of it is to bring awareness to the Survivor's Access to Supportive Care Act."

"We need to train more SANE nurses," Griffin tells Bustle. "Last year, in more than a dozen states, less than 25 nurses were trained in those states. That's an abysmal number in a high turnover, high burn out field. So this bill will earmark 12 million dollars to train SANE nurses so we can deal with the shortage." But Griffin (and Murray) know that simply training nurses to administer rape kits won't be enough to give survivors the consistent, ongoing care they need. Keeping SANE nurses in their jobs, continuing to provide training and education, and establishing best practices will be a vital part of ensuring that every victim, regardless of where she or he lives, has access to the care and support they need to adequately report their sexual assault.

"Currently, there are no standards or best practices that guide this care on a national level," Griffin says. "And I believe, and this bill is meant to address the belief, that a survivor's right to justice should not be impacted by her geography" (if you're interesting in helping promote the Survivors' Access to Supportive Care Act, you can contact your representatives here).

#MeToo has been an ongoing movement: the work of women, and particularly women of color, in that movement was established long before it became a viral hashtag. But Griffin is thankful that, finally, more light is being shed on a systemic, cultural, and nationwide problem.

"The #MeToo movement has made it easier to get attention on this topic," Griffin tells Bustle. "There are so many bills out there to address it, but it's been hard to get lawmakers to prioritize this legislation for a long time. What the #MeToo movement has done has allowed us to prioritize legislation. We can say, in 2018, that we should have rape kits at every hospital."

Advocacy work, as Griffin knows, can be challenging, debilitating, triggering, and exhausting. And yet Griffin and other survivors of sexual assault continue to advocate for themselves and others, despite the backlash and victim-blaming they may face. Perhaps that's why I was particularly struck by Griffin's answer to the final question of our interview.

When asked what she would say if she could talk to her past self directly after she was raped, Griffin responded almost immediately: "I would go back and tell myself that it's not your fault. This didn't happen because of something you did. That's what I would say, and that's what I would say to anybody else."