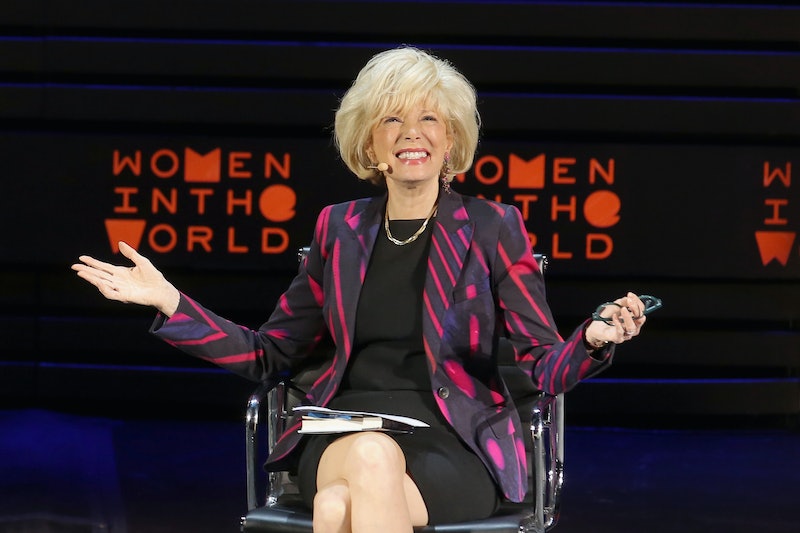 During a Sunday night 60 Minutes interview, Education Secretary Betsy DeVos struggled to coherently answer questions about school funding, school choice, and sexual assault on college campuses. DeVos was technically the subject of the interview, but the journalist who interviewed her — Lesley Stahl — might have been the main event. Younger generations, who are less likely to have cable subscriptions, may be relatively unfamiliar with the award-winning broadcast reporter, but Stahl's repertoire is extensive and storied, and if you haven't already had a chance, it's worth getting to know her a bit.

Stahl's resume is saturated with some of broadcast journalism's most prestigious programming. For the vast majority of her journalism career, the Massachusetts native and Wheaton graduate has worked for CBS, moving around between shows from time to time, as opportunities presented themselves. Initially, Stahl joined the network in 1972, which she has long attributed, at least partially, to an affirmative action initiative that was encouraging hiring managers to employ more women.

In April of 2017, she reflected on the affirmative action experience in an interview with The Detroit Free Press:

It was clear what they were doing, and in fact, the affirmative-action hires were really brought in as apprentices... We called ourselves the affirmative-action babies. It was so strange because in case we didn’t understand our status — and we laughed about it. We were just happy to be in the door; there was no resentment about it— but I’m telling you, they gave us little children’s desks that were in a corridor. ... We would never sit there because it was so ridiculous, but we at least had something to put our papers on.

After a few months on the job, Stahl was reporting on Watergate. Soon thereafter, she advanced to become the network's White House correspondent — the first woman at CBS to do so. She spent nearly 20 years in that role, covering the Carter and Reagan administrations, as well as a portion of the first Bush presidency. In 1991, she joined the 60 Minutes team as a correspondent. She has worked for the show ever since.

According to her 1999 memoir, Reporting Live, as it is quoted in book reviews at the time, Stahl recognized in 1972 that being hired to report for one of the country's largest networks, she had landed a major opportunity. When she first joined CBS's staff, she said, she was intent on proving herself.

"I knew my colleagues saw me as a lightweight, unqualified to join the Super Bowl champs of TV news,'' Stahl wrote. ''I had to find ways to convey my seriousness, to send out signals that I was resolute and earnest, not what the wrapping said I was. So I wore my glasses and worked round the clock.''

By the time that Stahl joined 60 Minutes, her reputation for political reporting had long preceeded her. At the time, she was widely lauded as a valuable addition. When the announcement was made, 60 Minutes creator and then-executive producer Don Hewitt enthusiastically praised Stahl's skills in an interview with The Los Angeles Times.

"There's nobody better than Lesley Stahl as a reporter," Hewitt said at the time. "I'll assume she'll just be getting started in her tenure on the show six years from now, when I retire." Nearly 30 years later, as Lesley is 76 years old and still capturing the public's attention with primetime interviews, asking political figures hard-hitting questions, it appears that Hewitt knew exactly what he was talking about.