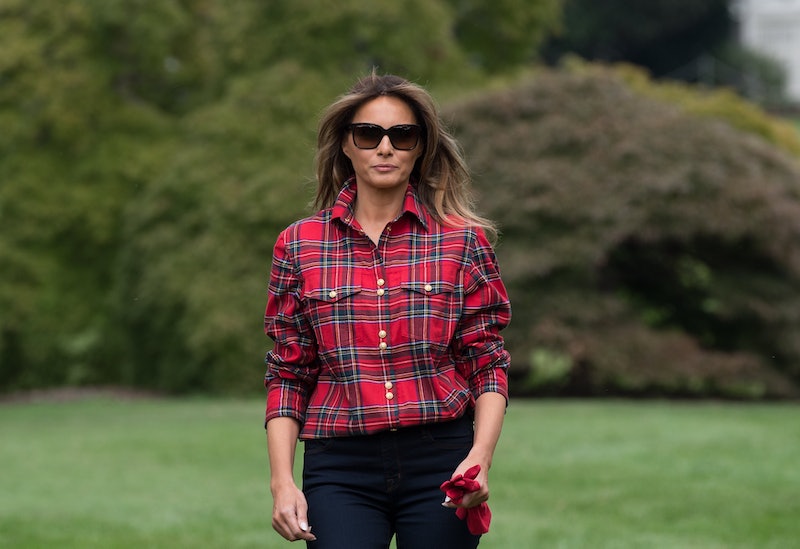 On Friday, first lady Melania Trump responded to the school librarian who rejected her gift to the school earlier in the week. Trump had gifted a collection of 10 Dr. Seuss books to the Cambridgeport elementary school in Massachusetts in celebration of National Read a Book Day, but librarian Liz Phipps Soeiro turned the books down on the grounds that they should have gone to more underprivileged schools and, additionally, that some of Dr. Seuss's work was racist and gross. Trump responded Friday, calling Soeiro's decision "unfortunate."

"Mrs. Trump intends to use her platform as First Lady to help as many children as she can," Trump's communications director said. "She has demonstrated this in both actions and words since her husband took office, and sending books to schools across the country is but one example. To turn the gesture of sending young students some books into something divisive is unfortunate, but the First Lady remains committed to her efforts on behalf of children everywhere."

In an open letter posted on The Horn Book earlier in the week, Soeiro thanked Trump for her donation to the school, but said that she couldn't accept the books for two reasons. For one, Soeiro objected to the White House's decision to only send books to schools with "programs that have achieved high standards of excellence, recognized by State and National awards and Blue Ribbon Awards." This has the equation backwards, Soeiro explained: If any schools deserve more books, it's those that are struggling to reach high standards of excellence, not those that already have.

"Yearly per-pupil spending in Cambridge is well over $20,000," she noted in her letter. "Meanwhile, school libraries around the country are being shuttered. Cities like Philadelphia, Chicago, and Detroit are suffering through expansion, privatization, and school 'choice' with no interest in outcomes of children, their families, their teachers, and their schools. Are those kids any less deserving of books simply because of circumstances beyond their control?"

Soeiro also objected to the First Lady's choice of books, arguing that Dr. Seuss, in addition to being "a bit of a cliché," had produced a lot of racist, bigoted works during his life.

"Dr. Seuss’s illustrations are steeped in racist propaganda, caricatures, and harmful stereotypes," she noted. "Open one of his books (If I Ran a Zoo or And to Think That I Saw It On Mulberry Street, for example), and you’ll see the racist mockery in his art."

Dr. Seuss, despite his later involvement in the civil rights movement, did indeed write and illustrate some hideously racist things, most notably a series of ads he made early in his career and some cartoons he drew during World War II. The ads contained anti-black and anti-Arab stereotypes, while the World War II cartoons are full of anti-Japanese caricatures. Here are a few examples [Warning — these are super racist and offensive].

In her letter to Trump, Soeiro suggested ten alternative books that Trump could send to underprivileged children, most of which address race, gender identity, multiculturalism and related topics from a progressive perspective.

The school district Soeiro teaches in distanced itself from her after she wrote the letter, clarifying that the "opinions expressed in the Horn Book editorial were those of the writer, and not a statement on behalf of Cambridge Public Schools."