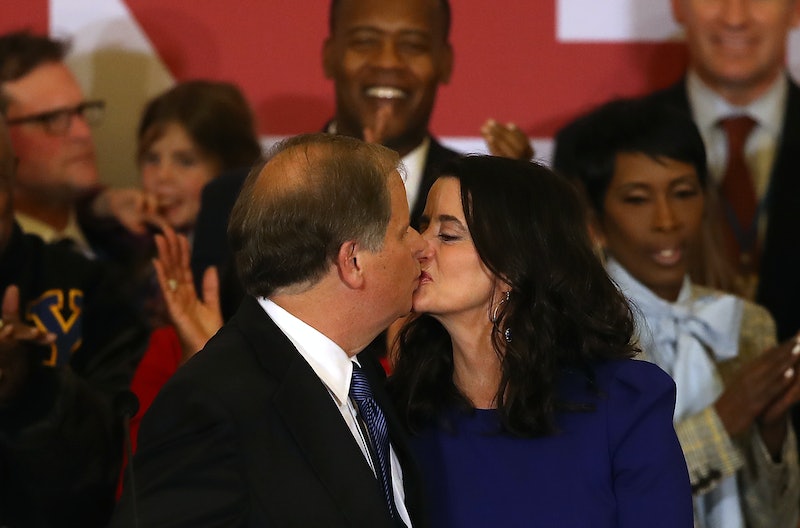 The special election in Alabama is over and Democrat Doug Jones is heading to the Senate. In a southern state as deep-red as Alabama, that sentence would read like a fantasy even a few short weeks ago. But it's happening, and that's brought a spotlight to Doug Jones and his wife, Louise, who celebrated their 25th wedding anniversary last night.

Unlike Kayla Moore, the outspoken wife of Doug Jones' opponent Roy Moore, Louise Jones herself has stayed more or less out of the spotlight. She did host several campain coffee meetups throughout suburban areas of Alabama in an effort to help convince women in those neighborhoods to back her husband.

"Make sure the Republicans understand that they can vote in this election if they don't like Roy Moore," voter Andrea McCafferty told Jones during a meeting at a Huntsville coffee shop. According to AL.com, McCafferty typified the sort of voter Jones would need to win: a white, female, college-educated suburban dweller.

Jones also participated in phone banking for her husband, and made a campaign appearance on Dec. 6 in her hometown of Cullman, Alabama, beside equal pay activist Lily Ledbetter. Of her husband, Jones said:

He has been driven by his values and justice and calling of public service.

The Jones' have three children — Courtney, Carson, and Christopher. Courtney graduated from Birmingham Southern College and is currently studying for her Ph.D. at the University of Alabama. She and her husband, Rip Andrews, have two daughters. Carson is also in graduate school at Colorado State University, and Christopher is a sophomore at Alabama.

The Jones' campaign strategy of focusing on peeling off suburban white women from their Republican seems to have paid off. Post-election results show that though white women with college degrees still voted for Moore over Jones, the Democrat was able to shrink that disparity significantly. For instance, in Madison County — which Trump won esaily — Jones managed to beat Moore by a margin of 17 points.

A volunteer in Huntsville, Madison's county seat, told Mic that fellow liberals in her area finally felt free to speak out about their politics. Even though Huntsville has been dubbed as the "most educated" city in Alabama, those with progressive view had, according to Susan Higgins, lived mostly in silence. "There's a grassroots energy and one-to-one engagement I haven't seen," Higgins said.

That organizing and speaking out paid off for Jones on Tuesday.

More like this
Manchester Arena Attack 5 Year Anniversary
By Ella Glover
Michigan’s Governor Is “Going To Fight Like Hell” To Protect Abortion Access
By Andrea Zelinski
10 Times Diana & Meghan Spoke Similarly On The Royal Family
By Sophie McEvoy
How To Fight For Reproductive Rights, Based On How Much Time You Have
By Courtney Young
Get Even More From Bustle — Sign Up For The Newsletter