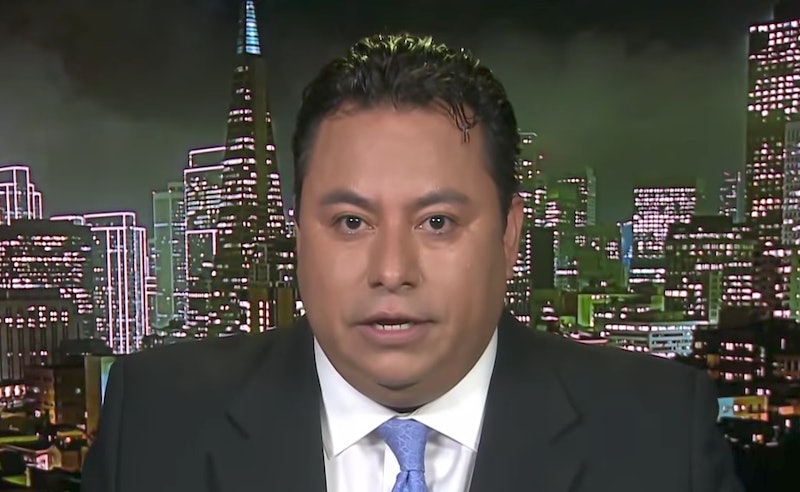 Saturday is set to be an interesting day for two unrelated groups in Washington, D.C. Fans of the rap-rock music group Insane Clown Posse will descend on the capital to protest the FBI's classification of their base as a "loosely organized hybrid gang," the same time Donald Trump supporters have a "Mother of All Rallies" (MOAR) march — in support, they say, of "American culture [and] traditions" — planned at the D.C. Mall. Among the speakers at MOAR will be Marco Gutierrez, the Latinos For Trump founder, a vocal pro-Trump figure who has made headlines for his provocative statements in the past.

In spite of spearheading a purported pro-Trump Latino faction, not many out of the Latinx community in the United States have heard of Gutierrez. The Mexican American conservative political activist co-founded the group which gained traction for building a pro-Trump narrative on the issues of immigration and border security during the 2016 presidential race.

Leading up to the election in November 2016, Gutierrez made the news after telling MSNBC host Joy Reid, "My culture is a very dominant culture, and it's causing problems. If you don't do something about it, you're going to have taco trucks on every corner." The warning of omnipresent taco trucks elicited a look of confusion from Reid who responded with, "I don't even know what that means and I'm afraid to ask."

Gutierrez's controversial ideas about his "dominant" culture may sound as if the United States faces an impending civilizational threat coming through the Mexico border but his comments became even more eyebrow-raising as he spoke with Reid. "Let's be honest," Gutierrez warned, "If you don’t do something about it, us as Hispanics, we’re going to have the White House full of taco trucks and we are going to be selling paletas on every corner around the White House. And, we are going to have piñatas and atole. I know my people, guys. You need to defend your country, our country." For those who may not know, "paletas" and "atole" are frozen fruit popsicles and a Mexican drink respectively.

Last year, Gutierrez's faction of supposedly pro-Trump Latinos carried out "Operation Taco Bowl" after Trump tweeted, "The best taco bowls are made in Trump Tower Grill. I love Hispanics!" On social media like Twitter and Facebook as well as video websites like YouTube, Gutierrez remains remarkably active with over 50 self-recorded videos of himself on YouTube alone where he talks about the Latinx community and Trump's politics.

Gutierrez is also a vociferous supporter of Trump's controversial vow to build a border wall. At present, Gutierrez's Twitter page boasts a header image in favor of Trump's notorious campaign promise to build a "big, beautiful" wall between Mexico and the United States of America. But Trump supporters have started expressing concern that their political icon is "going soft" on his promise.

Gutierrez is set to deliver a speech in favor of the president during the Saturday rally in the capital. Organizers behind the rally claim that the political purpose of the march is to "send a message to the Congress, the media, and the world we stand united to defend American culture and values."

In addition to that, MOAR organizers seem to have a clear position on their critics or anyone opposing their political views. In a statement on their website, organizers said, "Anyone who would protest this rally is protesting America and showing themselves to be the very domestic enemies our founding fathers warned us about" and that "anyone attempting to silence us is committing a direct assault on our constitutional rights of free assembly."