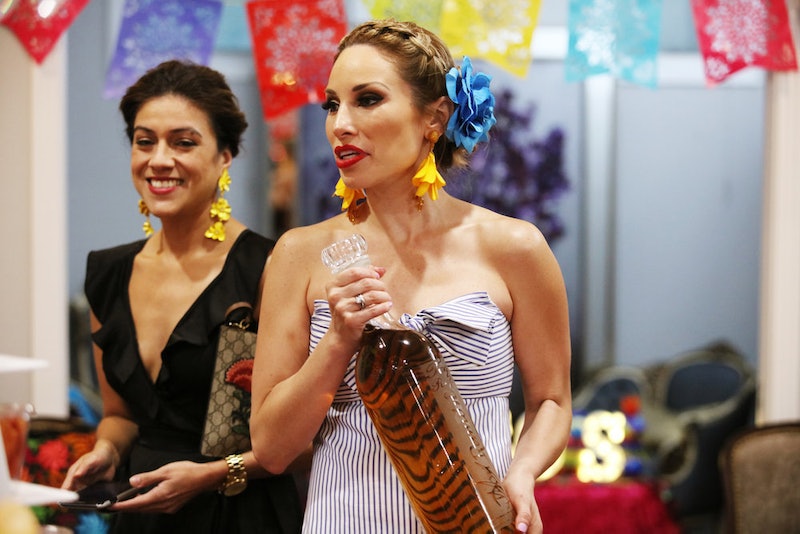 Peter Larsen/Bravo
By Lindsay Denninger
May 7, 2019

If there's one thing Bravo fans love, it's drama, and luckily, the network's newest show seems to fit that bill. Texicanas is, as Bravo says, the story of "a sisterhood of Mexican-Americans" living in San Antonio, Texas. They love each other, but they also love chisme (that's gossip), and based on her Bravo bio, it seems like Texicanas star Mayra Farret will be stirring up plenty of it herself.

According to Bravo, Mayra was born in Mexico, and she moved to San Antonio a decade ago with her husband, Fernando. She worked in finance back in Mexico, but because she didn't initially have a green card, she put her professional life on pause to focus on raising her two kids. Her Instagram bio says she's also a yoga instructor, so maybe she's very chill and has found her center through her practice.

However, Mayra describes herself in the Texicanas trailer as a "perfectionist in recovery," and according to her Bravo bio, the fact that she's a people pleaser can often cause tension within her friend group. It's hard to tell whether she'll be the one starting the drama or trying to mitigate it after the fact, but either way, it sounds like she'll be stuck in the middle of more than a few fights.

A look at Mayra's social media doesn't yield much more information than her personal and Bravo biographies. Her Instagram shows a lot of selfies, pictures of Mayra and her friends, and snaps of her at charity and work events. There are a few pictures of Mayra with her family, too, and boy — look how cute her kids are! (Her husband isn't hard on the eyes, either. Good for you, girl.) This seems like one big happy family.

Mayra also has amazing personal style, as evidenced by all of the show-stopping outfits she teases on her Instagram.

Other than that, Mayra's social media only offers a teeny, tiny glimpse into her life, so viewers will have to wait until Texicanas starts airing in order to find out more about her personality. She hasn't done any interviews yet, and she seems like she keeps to herself and her family — and that's totally cool. She is the CEO of home, as she refers to herself, and it's not like raising two kids is easy work. This is a busy lady!

While we wait to find out more information about Mayra, what else can we expect from Texicanas? According to Mayra's friend and co-star, Penny Ayarzagoiti, Texicanas will fulfill a Housewives-esque need for viewers, this time with a little more Texan spice (sorry, Dallas). "There's going to be a little bit of everything. You're going to see maybe a little drama, a lot of real-life stuff, and maybe some tears," she told Entertainment Tonight. "It's going to be exciting. It's going to be a plethora of a lot of things."

So buckle up, Bravo fans, there's a new show to add to your weekly slate.