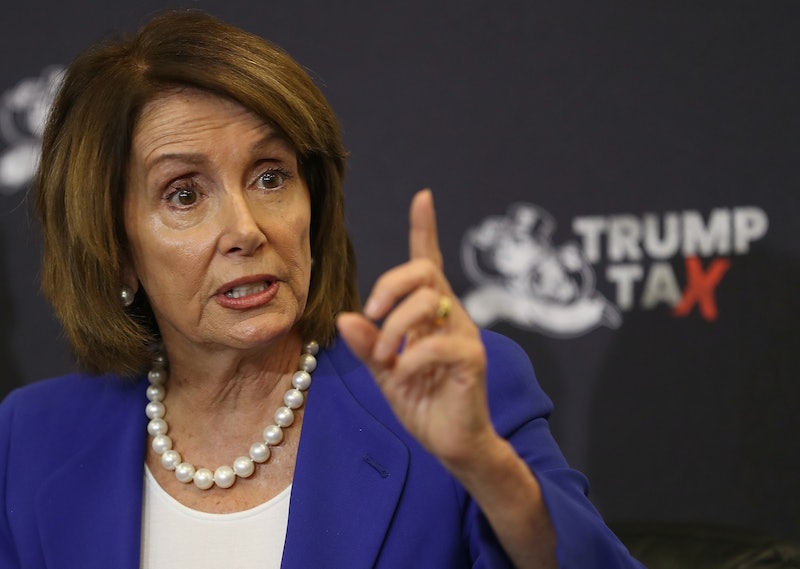 On Tuesday evening, President Trump will deliver his first official State of the Union (SOTU) address before a joint session of Congress. But while Trump will have the microphone for about an hour, Democrats are still determined to make a statement of their own. Many are planning to express their dissatisfaction with Trump via the people they invite with the guest ticket each lawmaker is afforded. Falling in line with this plan is House Minority Leader Nancy Pelosi, whose SOTU guest is Melody Klingenfuss, a Deferred Action for Childhood Arrival (DACA) recipient.

Pelosi is one of about thirty lawmakers bringing guests who relate to to the current immigration debate. Of those thirty, the vast majority are DACA recipients, according to CNN. Some other Democrats who wish to make a political statement at the speech are reportedly bringing guests affected by the #MeToo movement.

"We want to see how we can change the minds of these people, really get at their hearts," Klingenfuss, 23, told the L.A. School Report. However, well-aware of the current political tensions surrounding immigration, Klingenfuss also told the news outlet that she knows she and the other Dreamers attending the SOTU "have to be realistic of what we’re going to find there. It won’t be friendly, but we know what our mission is."

Klingenfuss told the paper that she is concerned about improving access to higher education for undocumented immigrants, which she said she struggled with when she was in high school and realized that counselors were not equipped to deal with her immigration status.

According to The Los Angeles Times, Klingenfuss legally came to the United States from Guatemala when she was nine years old. However, she came on a tourist visa, and when that expired, so did her legal status. She studied Communications and Political Science at California State University and received a master's from the University of Southern California. L.A. School Report reports that she now works to organize and mobilize Americans — documented and undocumented — to advocate for undocumented immigrants' rights.

The future of immigration in the United States has been the subject of fierce debate for decades, but the volume on the discourse has been magnified particularly since Trump took office in 2017. Almost nine months after being sworn in, Trump announced in September that he was ending DACA, but gave it a six month grace period, encouraging Congress to enact a more permanent version of the program. (DACA was signed into place by President Barrack Obama via Executive Order, which critics say was an abuse of power.)

However, as the six-month mark quickly approaches, Republicans and Democrats have failed to reach a consensus on how best to protect those immigrants who would or could be protected under a DACA-like bill. (Under the current program, immigrants must have been brought to the United States as children and lived here for the majority of their lives. Among other stipulations, they must also have a clean criminal record.)

Debate on how to handle the so-called Dreamers has reached an impasse in recent months, so much so that the would-be legislation was a major reason for the three-day government shutdown earlier in January. Democrats have insisted that Congress pass a DACA bill, but Republicans tried to attach increased border security to the legislation, including funds for a border wall, as well as alterations to legal immigration. By bringing a DACA recipient to Trump's SOTU, Pelosi and other congresspeople are not just pointing to a political debate, but are forcing Trump and other Republicans to look in the eye those people whom many in their party would support deporting.