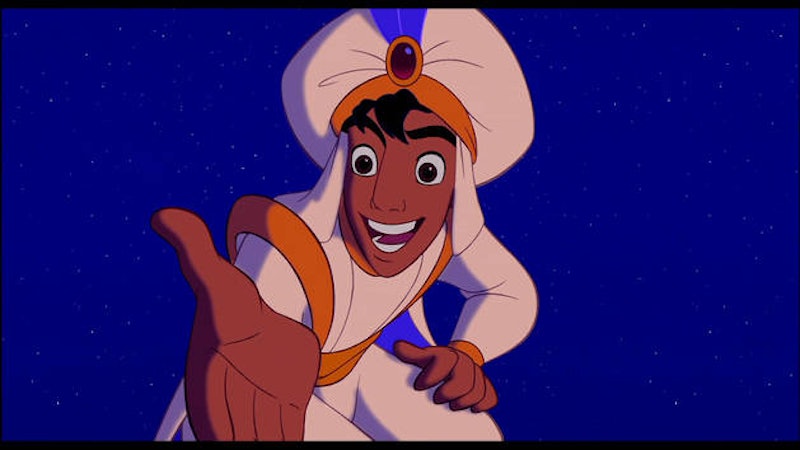 At the D23 Expo on Saturday, the live-action Aladdin film's three main stars were finally announced, including the titular character. Mena Massoud will play Aladdin, and if you haven't heard of the actor before, that's because he pretty new to the industry. The actor's modest resume includes a handful of television and film roles. In the past, he's appeared as Jared Malik in the series Open Heart and had a small role in Saving Hope, but his part in Aladdin will be his first major starring role. It's not uncommon for Disney to break a new actor, even in a high-profile franchise, and Massoud is a promising choice.

The casting of Aladdin a hot topic of discussion. Riz Ahmed and Dev Patel were rumored as possibilities, but it is Massoud, who is not yet a household name, will take on the role. But Aladdin isn't the only recent film that Massoud scored a role in. According to E!, the star was also recently added to Amazon's Jack Ryan, which he'll star in alongside John Krasinski. He's also set to appear in the film Strange But True, which features an all-star cast of Greg Kinnear, Nick Robinson, Amy Ryan, and more. While the star is still relatively unknown right now, his career is about to have an enormous year.

There's not a whole lot of info out there on the new star right now, but a quick browse of his social media can reveal a lot. For example, that he enjoys vegan food and takes food photos of it. He's not afraid to go topless, which will come in handy for Aladdin's flimsy costume. As for his listening habits, it's clear that he's a big fan of jazz music. The world is sure to find out more about Massoud soon.

As for Massoud's career, it's clear the star has known he wanted to pursue acting for a long time. He was born in Egypt, but raised in Canada, and according to Entertainment Weekly, he majored in acting and theatre at Ryerson University in Toronto. His first credited television role was in 2011, where he made a brief appearance in CW's Nikita. Like many actors, he's found Hollywood's lack of diversity to be a big obstacle. After being cast in Open Heart, he discussed these struggles in an interview with Defective Geeks.

"Also though, at this point in my career, being a visible minority in this industry still affects me. I can’t compete for roles that require me to be Caucasian or African-American, even if those characters really connect with me and intrigue me," he told the publication. "The competition may be less, some people would say, but the amount of work to be had is less as well. However, I think the industry is growing more and more and starting to support actors of all cultural backgrounds."

According to Rolling Stone, Aladdin will go into production in the next few months and is slated for a 2019 release date. Guy Ritchie (Snatch, Sherlock Holmes) will direct, and John August, of Big Fish fame, wrote the script. At the D23 Expo, the production company also revealed that Will Smith will play the Genie and Naomi Scott will take on the role of Jasmine.

Mena Massoud is definitely about to have a moment. The actor not have the longest resume, but his experience is strong. Massoud seems the perfect person to show Aladdin fans a whole new world.