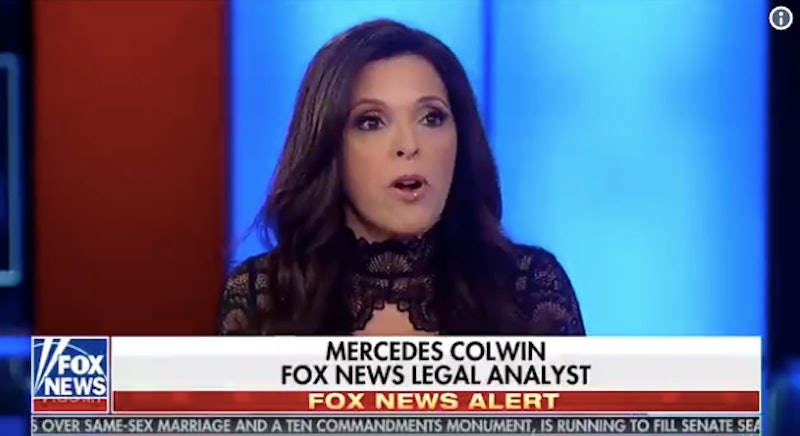 A Fox News analyst drew outrage following comments on Hannity about sexual assault and harassment, and is already facing some consequences. Last week, attorney Mercedes Colwin drew outrage from some viewers and sexual assault survivors after she said on the Fox show that victims of sexual predators are "very few and far between." On Tuesday, The American Lawyer reported that following the backlash from her comments on the Fox show, Colwin has stepped down from her law firm's leadership.

Colwin was the managing partner of Gordon Rees Scully Mansukhani’s New York office, but she has now quit that role. The firm's managing partner Dion Cominos says in a statement provided to Bustle that Colwin has "voluntarily stepped down from all management roles" and is "committed to rectifying the hurtful impressions created by her remarks."

Colwin's comments came in response to a question from Sean Hannity, the show's host. He asked her about the frequency with which sexual harassment claims are made up for political reasons or money. She responded that it's "definitely" more common than people think. "There are individuals that'll come forward with these outrageous allegations," she added.

Later in the interview, Hannity said, "There are women who are victims of predators." Then came Colwin's response: "There are, but very few and far between."

Colwin apologized for her comments on Twitter on Friday:

First and foremost, I am profoundly sympathetic of anyone who has been the victim of sexual harassment and believe they deserve full and complete protection under the law. As someone who has a deceased sister who was a victim of domestic violence, I know predators exist and deserve to be prosecuted to the fullest extent of the law.

She goes on to explain that her comments were specifically what she has seen as "an administrative law judge and an attorney. She writes that has seen alleged sexual harassment cases be misrepresented or fabricated as a way to seek an advantage in a dispute, "in court or otherwise." But at the same time, she underlined that she did not mean to trivialize survivors' experience or condone sexual assault:

Having considered the comments, especially my "very few and far between" remark which has regretfully caused tumult and pain, it was made in the context of civil cases of sexual harassment that I've handled as an attorney and as a judge. I did not mean to imply nor do I believe, that the victims of sexual assault within society at large are "very few and far between."

The show had been focusing on sexual predators in particular, following allegations against the Republican Senate candidate from Alabama Ray Moore. He has been accused of groping teenage girls, getting naked in front of them, and trying to force them to touch his crotch. Moore has repeatedly denied all the allegations, calling them "fake news."

In a radio interview with Hannity, Moore said that he would "not generally" date teenage girls when he was in his 30s and that he would always ask a girl's mother first.

It's unclear if Colwin's apology was enough for her to completely avoid any longterm consequences besides stepping down from her leadership position at the law firm. During the interview on Hannity, she also pointedly said that "a lot of these women" are alleging sexual harassment for money.

"Sexual harassment — that term is coined everywhere. Frankly, there are — the laws are very clear as to what it takes to be a violation of the law," Colwin said on the show. "You have to have some sort of damage, and these individuals — a lot of these women it's all about money. And they bank on the fact that these corporations have a reputation that they want to save."

Her other point, tied to that same argument, was that this causes jurors to then doubt actual victims of harassment. Her law firm seems to have taken issue with this nonetheless.

More like this
Are John Legend & Kanye West Still Friends? The Singer’s Latest Update Is Candid
By Brad Witter
'Scream’s Courteney Cox Has Broken A Major Horror Record
By Sophie McEvoy
Beyoncé & Madonna’s “Break My Soul” Remix Honors A Group Of Black Icons
By Stephanie Topacio Long
Kim Kardashian & Pete Davidson’s Relationship Timeline From Start To Finish
By Jordyn Tilchen and Bustle Editors
Get Even More From Bustle — Sign Up For The Newsletter