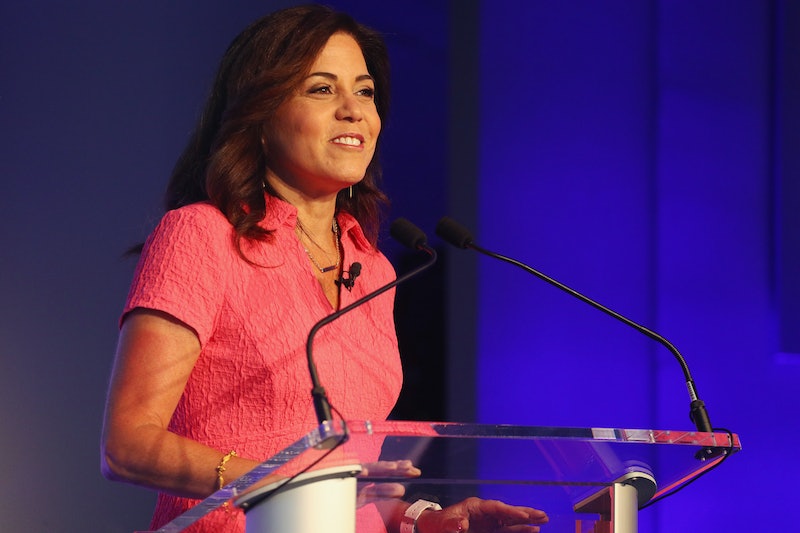 The 2018 Super Bowl will be kicking off just hours from now, which means you don't have very much time left to familiarize yourself with all the stats, story lines, and trivia. For example, maybe you know about the teams, the players, and the coaches, but what about the reporters? In short, if you've never heard of veteran NFL sideline reporter Michele Tafoya before, or her husband Mark Vandersall, here's your opportunity to do so.

If you're a football fan, or somebody who's been following sports on major television networks over the last couple of decades, then you've probably seen Tafoya before. She's been a sideline reporter for NBC Sports since 2011, and she previously held the same role on ESPN's Monday Night Football. Basically. she's been in the network TV sports business for more than 20 years, having first joined up with CBS Sports in 1994 covering the NCAA.

What you might not have known, however, is that Tafoya's legal name is Michele Tafoya Vandersall, as it has been since she married her husband Mark back in 2000. He's reportedly a financial adviser, and a fan of Minnesota sports. The pair have two children, the first born in 2005, and the family currently resides in the state of Minnesota.

Tafoya will be walking the sidelines during Sunday's Super Bowl, providing updates on the coaching staff and the players, particularly if there are any injuries. It figures to be a massively viewed event, just like it is every year; she'll be working the game along with the broadcasters, Cris Collinsworth and Al Michaels.

It won't be Tafoya's first stint working a Super Bowl. To the contrary, this will be the fourth of her career. She recently discussed her view of gender in sports broadcasting with The Star Tribune, saying she focuses on professionalism above all else.

I've never been one of those 'I am woman, hear me roar' kind of people. I'm more about being a professional. I'm going to do my job. I'm going to do it to the best of my ability. I don't care if you're a man or a woman.

The matchup between the Philadelphia Eagles and New England Patriots might be a little disappointing to her and Mark, however, given their roots in the North Star State ― the Minnesota Vikings were in the running for a spot in the Super Bowl this year, until they got obliterated by the Eagles two weeks ago.

The Vikings, who haven't won an NFL championship since 1970, made it to the NFC Championship game in Philadelphia, but ended up losing to the Eagles by a staggering final score of 38 to 7.

Despite that fact, however, Tafoya won't have to travel too far to work the game, as it will practically be happening in her family's backyard. Unlike other major American sports, which award home field advantage to the team with the superior regular season record, the Super Bowl is hosted at a pre-selected, ostensibly neutral site each year, and this time it's Minnesota's U.S. Bank stadium. If the Vikings had beaten the Eagles last week, they'd be the rare team to play a home game in the Super Bowl. As it stands, it'll be the Eagles and the Patriots braving the Minnesota winter.

If you're looking forward to watching the big game, you won't have to wait much longer. Kickoff is schedule for 6:30 p.m. ET, or 3:30 p.m. PT if you're watching on the west coast. As it stands now, the Patriots are the favorites, but there's no telling what will happen when the players actually take the field.