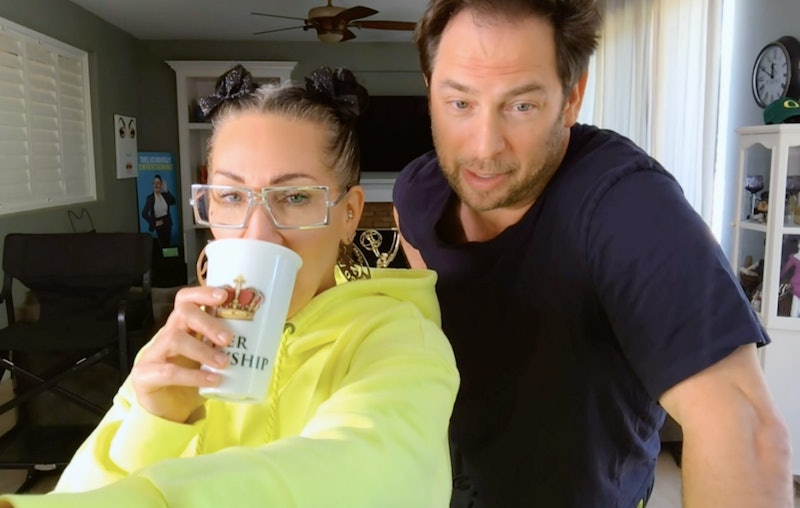 For nearly a decade Michelle Visage has been RuPaul’s right-hand woman in Drag Race and back in 2019 she became one of the most popular contestants on Strictly Come Dancing. Her latest project, a BBC Three series called How’s Your Head, Hun?, will give fans an insight into Visage’s personal life as she opens the doors to her L.A. home. But who is Michelle Visage’s husband? David Case gets a fair few cameos in How’s Your Head, Hun? but we want to know more him.

Case is an author and screenwriter. Having moved in similar glamorous circles as Visage at a young age, he met the Drag Race judge through a mutual friend. In an interview with Newsweek, Visage revealed that Case was attending Juilliard, a performing arts school in New York City, when they first became acquainted.

Speaking to Newsweek about her attraction to her now husband, Visage said:

“He was an actor and he was confident with who he was. What I loved most about him was he didn't stand for my bullsh*t. So when I met David, it was a connection, but it was also like a partnership. I just knew immediately that he was definitely the one.”

The pair got married in 1997 and now have two teenage daughters, Lillie and Lola.

Alongside writing, Case was also a track and field athletics coach. Through his work coaching he founded Klickspeed. Klickspeed is a backside arm mechanics training device which aims to help people to run faster and improve their overall athletic performance. In a Facebook post he talked about how he’d coached high school track teams in Los Angeles County. He described it as, “the single most time-consuming thing that took me away from writing. But my daughter was on the team and she was a part of something bigger than herself. I loved helping her and all the kids come together as a team; life couldn't have been better as I answered the call to what was in front of me.”

Visage and Case celebrated their 22nd wedding anniversary in June 2019. Highlighting that they're as loved up to this day as they were the day they said "I do," Visage posted a throwback picture of them with the caption, "This was a date night. I was at a club gig for my job on @1035ktu and he wanted to come along to see what I did at night. A week later we were engaged. Today is our 22nd anniversary and I have no idea where the time went, however, I know where my boobs went! To my love @jaxspenser thanks for the years and the hard yards you’ve put in (figuratively AND literally) I wouldn’t want to do this thing called love with anyone else. HAPPY 22ND!"

While Case has always been super vocal on social media in his support of Visage, this will be the first time that they appear in a show together. How’s Your Head, Hun? promises to be an access-all-areas insight into their life with their daughter and dogs in lockdown. “I'm about as real as I can be on this show, warts and all. There is quite literally nothing to hide behind. I've got no glam team; I'm not sitting behind a desk judging anyone,” says Visage in a statement, “It's just me in my natural, very chaotic habitat. I'll be checking in with some of my friends to see how their heads are doing through all of this.”

If you want to escape into Visage and Case’s world for a little bit during lockdown then you can watch How’s Your Head, Hun? every Tuesday on BBC Three.

More like this
Molly-Mae & Tommy Fury Revealed Their Baby Girl's "Really Unusual" Name
By Sophie McEvoy and Sam Ramsden
'Love Island' Has Added Yet Another Bombshell To The Villa
By Bustle UK
Spencer Matthews’ Impressive Net Worth Expands Far Beyond Chelsea
By Sam Ramsden
Joey Essex Is Rumoured To Be Dating A 'Love Island' Favourite
By Sam Ramsden
Get The Very Best Of Bustle/UK
Sign up for Bustle UK's twice-weekly newsletter, featuring the latest must-watch TV, moving personal stories, and expert advice on the hottest viral buys.