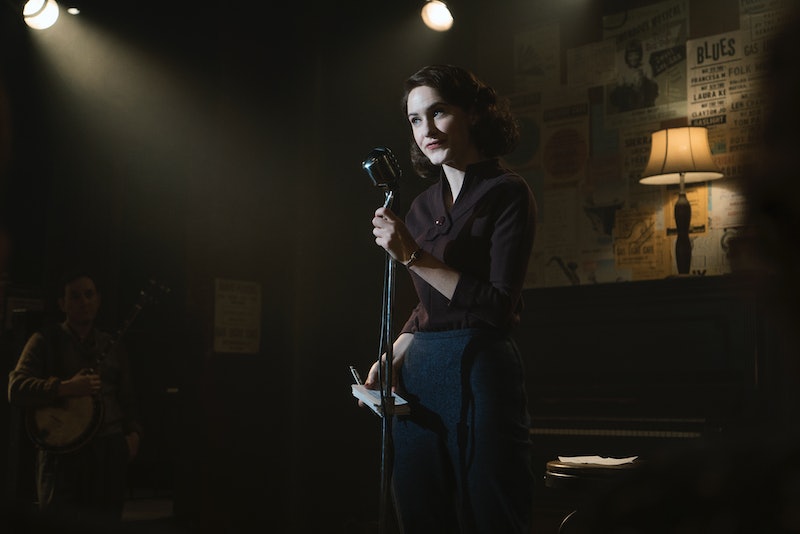 The Marvelous Mrs. Maisel features one real comedian — Lenny Bruce, the infamous and unrestrained comic who influenced basically all of your favorite funny people. However, most of the characters on the Amazon series are fictional, but seem to have real inspirations. Which comedian is Midge Maisel based on, if anyone? It turns out that Midge's sense of humor and stage presence was inspired by several funny ladies.

Nobody has quite Midge's story — a housewife whose husband failed at comedy and left her, causing her to realize that she's way better at comedy than he could ever dream to be. There also aren't that many female comedians from the '50s and '60s for showrunner Amy Sherman-Palladino to choose from as inspiration, unfortunately.

But, Palladino did have one source of inspiration at her fingertips. “I grew up around comics,” she said in an interview with Vulture. “They are not always a chipper, happy bunch. If they were, there would be no comedy, because comedy doesn’t come from a bunch of happy, well-adjusted people.” However, while she herself is cynical, according to that same interview, that isn't the energy she brings to her characters that often. "I love a world where my lead characters are powering through it without that cynicism. I love the energy of female heroines tromping through life with their high heels and their great hair."

So here is a handful of female comics who inspired the writers and actors on The Marvelous Mrs. Maisel as well as a few that may have, coming from that time period — and some that you should at least know about if Midge piqued your interest about comics from decades past.

Listed in the above Vulture profile as a contemporary of the fictional Midge's, Jackie "Moms" Mabley was the first female standup comedian. She started on the vaudeville circuit as a teenager in the 1910s and went on to record comedy albums, perform at the Apollo, Carnegie Hall, and eventually on television. According to The New York Times, while Mabley dressed down in a housecoat and gushed over younger men on stage, she was a glamorous out lesbian in real life. That makes her more like Jane Lynch's character Sophie Lennon, who also has an outlandish comedic persona on Maisel, but a more reserved, glam life offstage.

Arguably the most famous and well-known female standup at the time, Rivers and Midge Maisel have similar senses of humor and style. Their accents and cadences are a little similar, as well. According to Vanity Fair, star Rachel Brosnahan studied Rivers in preparation for the role as well as Phyllis Diller (below) and her own hilarious grandmother.

Another female comedian whose housewife persona onstage may have inspired the character Sophie Lennon, Diller was a key figure in the comedy world Midge is inhabiting, but maybe not the comedic style she settles on in the show.

When Midge is working the "party circuit" she meets Nate Cordry's character Randall and is tempted to join him on stage as part of a comedy duo like Ben Stiller's famous parents — Jerry Stiller and Anne Meara.

Another famous sketch and improvisational comedy duo was Elaine May and Mike Nichols — yes, the Nichols who directed The Graduate. Maisel fans will definitely recognize a bit of this legendary team in Midge, with every season.

A female "Borsht Belt comedian," Fields is cited as an inspiration by Sherman-Palladino in an interview with the New York Times. Toti Fields was a popular actress in addition to being a comedian, best known for her roles in That's Life and Here's Lucy in 1968, as well as Medical Center in 1969.

In an interview with NPR, Broshnanan cited this pioneering female standup as an influence, and it's hard not to see why. Her sunny persona and feminine style makes her biting jokes surprising, something Midge would likely want to emanate.

While Midge on The Marvelous Mrs. Maisel has a singular sense of humor and a commitment to femininity and style that sets her apart on the series, it's easy to see the influences from the real world at play. It's fascinating to see the roots of not only the comedians we know and love today in these pioneering comics, but also the enthralling, unique character that is Midge on Marvelous Mrs. Maisel.