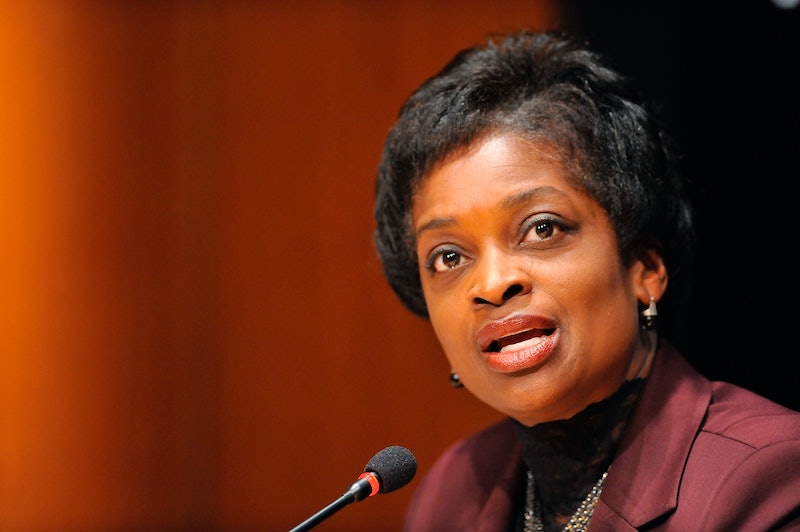 Normally, it would be possible to go your entire life without knowing anything about the people who make up the Federal Communications Commission. This, however, is not so with the furor brought up by the vote on whether to repeal net neutrality. Therefore, you need to know, for example, who FCC commissioner Mignon Clyburn is. This Democratic Obama appointee has served on the FCC since 2013, and she's a significant figure in the fight to maintain net neutrality. In fact, she's one of the reasons why the country even had net neutrality to begin with.

Clyburn, currently the longest-serving FCC commissioner, has not hesitated to speak her mind on the issue of net neutrality. "We used to talk about clean water. We used to talk about good roads. Now, this is the information superhighway, and the opportunities are unbound when it comes to it," Clyburn said in an interview on the Biz Please podcast. "So when we talk about opportunities for our communities and how we get from where we are now to where we desire to go in an expedited fashion, technology is the key and connectivity is essential."

Boiled down to its essence, Clyburn is arguing that internet is a necessary utility. And its management can't be left in the hands of profit-seeking companies.

Clyburn has also used her voice on Twitter, releasing a version of the proposal to repeal net neutrality with the majority of it crossed out, leaving only the words making up a sentence that reads "After further review of the record, we affirm 2015 Open Internet Order." The order she's referring to is the document that established net neutrality to begin with. That order included three main provisions: internet service providers, or ISPs, were barred from blocking sites, deliberately manipulating speeds, or prioritizing certain sites because of payments made.

As opposed to FCC chairman Ajit Pai, who has been accused of being in the pocket of the telecommunications industry (which, of course, includes the ISPs), Clyburn comes down squarely on the consumers' side. She's spent much of her career trying to protect open access to communications for marginalized groups of Americans, including disabled citizens and those who are deaf or hard of hearing. Like Pai, Clyburn is an advocate for strong competition in the telecommunications field — but unlike Pai, she argues that smart regulations are also necessary to protect affordable access to phone and high speed internet access for consumers across the demographic spectrum.

Diversity, Clyburn has argued, is also at stake with the FCC vote. And so many others have agreed, arguing that dismantling net neutrality will place the internet in the hands of the rich, further marginalizing already disadvantaged groups. These are exactly the people who Clyburn has spent her career trying to protect, during her years at the FCC and before that on the Public Service Commission in South Carolina. She also served as the publisher and general manager at The Coastal Times, a newspaper based in Charleston that she also co-owned for 14 years. They mainly focused on the issues most closely tied to the African American community in Charleston, a mission that Clyburn has not left behind on her quest to keep the internet free and open to every American citizen.

Clyburn is the first black woman to serve on the FCC, and her time as acting chairperson on the commission also marked the first time when a woman had served in that office. The fight over net neutrality is not the first time that she has publicly clashed with Chairman Pai, an Obama era Republican nominee to the commission. Clyburn does, however, see net neutrality as one of the most important issues that she's faced. "I approach my nearly 19 years in regulation, I look at this as the most difficult week of my entire regulatory career," Clyburn said on the Biz Please podcast.